While Jos Buttler and Joe Root scored hundreds in the chase, their efforts went in vain as the Pakistani bowlers did not let their batsmen down.

After being bundled out for 105 by West Indies in their first game of the ICC Cricket World Cup 2019, Pakistan scored 348 runs batting against England at Trent Bridge in Nottingham on Monday.

Skipper Sarfaraz Ahmed, who chipped in with 55 off 44 balls, lauded the batsmen after his team secured a 14-run win over Eoin Morgan-led side and ended their 11-match losing streak.

While the opening pair of Fakhar Zaman and Imam-ul-Haq stitched a 82-run partnership at the top, Babar Azam (63) and Mohammad Hafeez (84) played their part as Pakistan put up a big total on the board.

While Jos Buttler and Joe Root scored hundreds in the chase, their efforts went in vain as the Pakistani bowlers did not let their batsmen down. (ALSO READ: Cricket World Cup 2019: Old hands Mohammad Hafeez, Wahab Riaz lead Pakistan to 14-run win over England)

It’s a great team effort. Credit to batsmen for taking us to 350. Then bowlers bowled really well today, said Sarfaraz.

Game starts at 10.30, so the first 10 overs are very important. If you lose early wickets, you can’t this sort of a total. Fakhar and Imam did a really good job, he added.

While South Africa had surprised one and all after they opened the bowling with Imran Tahir in the World Cup opener against England, Pakistan too went ahead with the same tactic as Shadab Khan opened the bowling.

The move paid off as the legspinner dismissed Jason Roy in the third over to give Pakistan an early breakthough. Sarfaraz also highlighted that fielding made the difference. (ALSO READ: Cricket World Cup 2019: Fielding was difference between two sides, it cost us 15-20 runs: Eoin Morgan)

Started with Shadab today, because we know they’re not good batsmen against spin – Roy and Bairstow, said Sarfaraz.

Fielding a very important part. The last ODI series, fielding made the difference. Confidence booster for the future. Hopefully we’ll play better cricket from here. Not easy to come back from 11 losses in a row, he concluded. 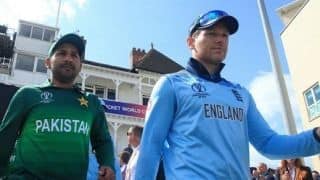