Sunday won't be the first time England have had a shot at winning ODI World Cup. They have had thrice reached this far but suffered heartbreaks on each occasion.

The wait is finally over. England are into their fourth ever ODI World Cup final after 27 years. Being pinned as the favourites to win the tournament, England have lived up to the billing despite a brief struggle midway that shook their chances of making it to the semi-finals.

Under the leadership of Eoin Morgan, England have engineered a remarkable turnaround since their embarrassing performance in the last edition of the showpiece event in 2015. They had exited the tournament in the group stage itself but since then, have climbed up to the top of the ODI rankings while building a reputation of posting intimidating totals and chasing down any target thrown at them. However, there’s still one game to play, the all-important final against New Zealand, a team that is also itching to go one better after making a second straight world cup final. The teams are yet to win the title, therefore, it’s a massive opportunity for both sets of players to cement their legacies and for the future of cricket in these two nations.

However, Sunday won’t be the first time England have had a shot at the glory. They have had thrice reached this far but suffered heartbreaks on each occasion – in 1979, 1987 and 1992.

Will 2019 bring in a change? Or will history repeat itself?

With convincing victories over Australia, Canada and Pakistan, England made it to the semi-finals. In the last-four they faced New Zealand whom they beat by nine runs to enter a maiden world cup final. They were up against Clive Lloyd’s all-conquering West Indies. An intimidating task but not impossible. Mike Brearly opted to bowl first at Lord’s and soon West Indies were put in a spot of bother at 99/4. Out came Viv Richards who lead the recovery in company of Collis King to lift their team to 238/5 before being separated. King scored a quickfire 66-ball 86 while Richards scored a brilliant 138 off 157. England were set a target of 287 in 60 overs.

They went on to be comprehensively beaten by 92 runs – the foundation of which was laid by their opening pair of Brearly (64 off 130) and Geoffrey Boycott (57 off 105) who struggled to score. Despite not losing any wicket, England crawled to 129/0 in 38 overs. And then their final seven batsmen registered scores in single digits with five of them unable to open their accounts. England were bowled out for 194 in 51 overs.

England won four of their six league group matches, with both their defeats coming against Pakistan. However, the wins were enough to secure a semi-final berth where they defeated defending champions India by 35 runs at the Wankhede Stadium. A mouth-watering final was set up with arch-rivals Australia at Kolkata’s Eden Gardens. An evenly contested finale followed after Allan Border, the Australia captain, opted to bat first. Opener David Boon top-scored with 75 while Mike Veletta added a quick 45* to guide Australia to 253/5 in 50 overs.

England lost opener Tim Robinson for a first-ball duck before recovering through Graham Gooch and captain Mike Gatting. With England at a decent 135/2, Border introduced himself into the attack and Gatting (41) was out while attempting a reverse-sweep. Bill Athey was then run-out on 58 after which Australia edged ahead. Allan Lamb scored 45 to keep England’s hopes alive but with 17 runs needed in the final over, England managed nine to finish at 246/8.

England started the tournament remaining unbeaten for their first six games. That run included victories over India, West Indies, Australia, Sri Lanka and South Africa. Their match against Pakistan was washed out due to rain but they were in prime position to win that too having bowled their opponents for a mere 74. They lost just two of their round-robin matches and then beat South Africa in a rain-affected semi-final.

In the summit clash, they met Pakistan. Imran Khan, the Pakistan captain, opted to bat first at the MCG and his decision backfired with Derek Pringle accounting for both the openers cheaply. Imran promoted himself and alongside Javed Miandad took upon the responsibility to repair the damage. The duo added 139 runs for the third wicket before Richard Illingworth removed Miandad on 58. Imran finished as the top-scorer with 72 and Inzamam-ul-Haq with Wasim Akram added quick 52 runs for the fifth wicket to set England 250 to win. England were off to a bad start, losing Ian Botham for a duck. And were soon reduced to 69/4 when captain Gooch departed on 29. Neil Fairbrother (62) and Allan Lamb (31) fought but Akram’s spell proved decisive. In two successive deliveries, he sent back Lamb and Chris Lewis and England eventually were bowled out for 227. 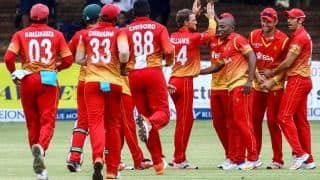