As a World Cup match goes, game three at Cardiff was not what fans would have wanted.

CARDIFF: As cakewalks go, this one is right up there. At least when it comes to the World Cup. All told, game three of the ICC Cricket World Cup 2019 lasted 45.3 overs. In a tournament of this magnitude, you don’t want entire innings to last that long.

New Zealand won a great toss, opted to field and bowled out Sri Lanka for 136 in 29.2 overs. Inside Sophia Gardens’ refreshments areas there were lines for beer that lasted longer than Lahiri Thirimanne, Kusal Mendis, Dhananjaya de Silva, Angelo Mathews and Jeevan Mendis lasted on the pitch. And like one brand of beer being served liberally across the venue, the sum of Sri Lanka’s batting effort was very, very ordinary.

Can you imagine what Sri Lanka cold have been rolled over for if their skipper Dimuth Karunaratne, named in the ICC’s Test team of the Year for 2018, had not carried his bat for 52 off 84 deliveries?

Chasing 137, New Zealand galloped home in 16.1 overs with Martin Guptill and Colin Munro giggling their way to breezy half-centuries. “Yeah, Colin and I had some good chatting in the middle,” said Guptill after the win, while highlighting that finishing the chase as soon as possible was on their minds keeping the business end of the World Cup.

As a World Cup match goes, this was not what fans would have wanted. Even a gang of Black Caps fans, descending the stairs of GrandStand 25 during the innings break in 1992 World Cup replica jerseys, shook their head in disappointment.

On choppy waters, New Zealand hopped onto their surfboards and rode the waves, while Sri Lanka floundered and sunk.

You can put some of it down to the green and lively Sophia Gardens pitch, which offered New Zealand’s fast bowlers pace and bounce. As Thirimanne – who was out lbw second ball of the match – highlighted, it was the seam movement that surprised some of Sri Lanka’s batsmen. You can look at Sri Lanka’s jittery batting lineup, which starts with Thirimanne, recalled to the ODI squad after 18 months, and the skipper Dimuth Karunaratne who since the 2015 World Cup played one ODI – last month. You can question the logic of sending de Silva ahead of Angelo Mathews.

You can pinpoint some over-aggressive shots, as Karunaratne stopped short of doing after the match. Wearing a dejected look, Karunaratne wondered what might have been if some of his batting team-mates had played “a few more overs”.

You can glance at Sri Lanka’s ODI form this year – ten matches, nine losses – and say the outcome was no surprise.

Or you can look at New Zealand, clap your hands and say “played, boss”.

Kane Williamson had no hesitation in opting to field. He didn’t have Tim Southee to toss the new ball too, but the man who replaced him, Matt Henry, put in a performance that underlines the depth in this New Zealand squad. Bowling fast and accurately – he concede just three fours in his first seven overs – Henry picked off Thirimanne, Perera and Kusal Mendis. The latter two fell in successive deliveries.

Backed by some electric fielding in the circle, particularly by Trent Boult who flung himself around liberally – and swift work in the deep – that’s you, Mitchell Santner – the Black Caps never let Sri Lanka get away after they lost three wickets for seven runs.

With no disrespect, let’s put to one side the wickets that Colin de Grandhomme and Jimmy Neesham got in their respective two overs, and cut straight to Lockie Ferguson’s relentless attack. He was quick and accurate and repeatedly used the short ball to have the Sri Lankan players swaying and ducking. After getting de Silva lbw in his first spell with a fuller delivery, Ferguson went short in his second burst and knocked off the tail.

When you have fast men like Henry and Ferguson putting in this kind of effort on days when Southee is missing, Boult goes wicketless and Santner is needed for just two overs, it speaks of your prowess.

Williamson spoke before this match of how the Black Caps want to play the brand of cricket they’ve done under his captaincy since Brendon McCullum retired. The 2015 World Cup, when they danced their way into the final, is history, says Williamson. New Zealand flew under the radar heading into the World Cup, but Williamson hopes people are talking about their chances. Traditionally, New Zealand cricket teams have done well at World Cups. Williamson expects his to do so as well.

They’ve now gotten off to an emphatic start. Eight games remain. It’s only a start, Williamson knows, and as Guptill said the road ahead is much harder. Today was easy.

Karunaratne, Thirimanne and Jeevan Mendis each pointed out that Sri Lanka are not crushed after today’s loss. Eight games remain. They expect friendlier surfaces, but have one more match in Cardiff in a few days, against Afghanistan.

If it’s another green top, Sri Lanka have had the best team to show what needs to be done to win. 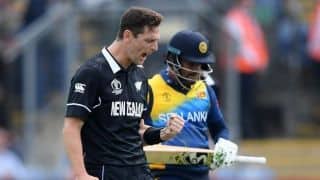