As in their first encounter of the last tournament four years ago, New Zealand made easy work of Sri Lanka in their opening match of the ICC Cricket World Cup in Cardiff on June 1.

This win for the Black Caps extends their grasp over Sri Lanka in ODIs to four consecutive matches dating back to December 2015. For Sri Lanka, this is their ninth loss in ten completed ODIs this year.

Kane Williamson won a good toss and put Sri Lanka in to bat on a green-tinged, lively surface. Sri Lanka’s top order was guilty of a couple loose shots, but full credit to New Zealand’s attack for inducing shots and repeatedly beating the bat to keep up the intensity. Captain Dimuth Karunaratne became only the second batsman in World Cup history to carry his bat through an innings as he witnessed his batting order crumble.

For the many Sri Lankan fans that turned up at Sophia Gardens – some from Colombo and Melbourne – this was a disappointing match. Karunaratne’s unbeaten 52 off 84 balls – an innings that featured just four fours – aside, the next best was Kusal Perera’s 29 off 24.

Sri Lanka’s problems began as early as the second ball of the match, bowled by Matt Henry, to which New Zealand successfully reviewed a a not-out lbw verdict against Lahiru Thirimanne. A few aggressive shots from Perera – with real shades of Sanath Jayasuriya – was followed by a collapse of four wickets for 13 runs.

Perera mistimed a big hit off Henry towards mid-off. Next ball, the new man Kusal Mendis was hurried into a defensive prod by a ball that got big on him and the edge was well taken by a diving Martin Guptill at second slip. Henry bowled a fine opening spell of 7-0-29-3, in which he conceded just three fours.

The next to fall was Dhananjaya de Silva, beaten for pace by Lockie Ferguson and given lbw for four. The batsman did not review, wisely.

Colin de Grandhomme struck with his fourth ball, getting Angelo Mathews to tamely feather a catch to Tom Latham. The former Sri Lanka captain failed to score off his nine balls faced. Backed by some terrific fielding inside the circle – Boult, in particular, was electric as he flung himself around to save runs – and fast work by the outfielders, New Zealand maintained their grasp on the innings.

Karunaratne and Thisara Perera (27) put on Sri Lanka’s highest partnership, worth 52 runs, and the end was also limp as Ferguson hustled the tailenders with pace.

Chasing 137, New Zealand cantered home. Guptill began with two fours off Lasith Malinga, then after a brief quiet period Munro teed off against Suranga Lakmal. The fours kept flowing which lessened the asking rate with ease, and by the time Guptill dumped Isuru Udana over long-on for six to get his half-century off 39 balls, the match was long over as a contest. 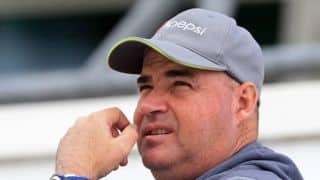 Cricket World Cup 2019 - A shocking start but we will come back strong: Mickey Arthur