After centuries to begin the 2011 and 2015 World Cups, does Kohli feel a hat-trick is on the cards against South Africa in 2019?

SOUTHAMPTON: India captain Virat Kohli has laid down the marker with his batting in ODIs, and as he prepares to lead the team for the first time in the ICC Cricket World Cup 2019, he believes that certain changes made to the nature of the side has put them in a far better position than they were at the last ICC tournament played in England.

In 2017, Kohli captained India to the final of the ICC Champions Trophy on these shores. That path was set up by the top order comprising Shikhar Dhawan and Rohit Sharma and Kohli and backed by some fine bowling from the pace bowlers. In the final at The Oval, Mohammad Amir accounted for all three Indian batsman and there went the match.

Two summers on, Kohli said that the learnings from that tournament was that India needed to add wrist-spin to its armoury. Having done that successfully with the additions of Kuldeep Yadav and Yuzvendra Chahal, and winning overseas ODI series in South Africa, Australia and New Zealand since the Champions Trophy, India were a far better team.

“I think the lesson is basically to play the cricket that we know how to play. We didn’t try anything drastically different in the Champions’ Trophy. We just stuck to our strengths and in the final the better side beat us,” he said. “We have plugged a few areas that we needed to since then, we have brought in wrist-spinners to take wickets in the middle overs and that has been a reason for a lot of our success in the last couple of years.

“So, from that point of view, we are a stronger side when you compare it to the Champions’ Trophy side. And I think the first week has been a gradual sort of progress, I would say. The teams that have been more composed are the ones that are winning games and have better chances of doing well in pressure situations. The teams that try too much or make bad decisions are the ones who are suffering and that is the pressure the World Cup brings.

“So, as I said, we need to bring all our experience to the play tomorrow to be able to make right decisions under pressure situations compared to the opposition. And the team that makes better decisions is going to win in a high pressure tournament like the World Cup.”

For Kohli, this is his third World Cup. In 2011, he scored a century against Bangladesh in his first World Cup match and then in the final, a vital 35 to help Gautam Gambhir get India out of a tough spot against Sri Lanka. In 2015, scored a century in India’s opening match and was a senior member of the team that went as far as the semi-finals.

In 2019, he is the No 1 batsman in ODIs and skipper of the second-ranked team, seen by many as tournament favourites. For him, leading India at the World Cup was huge.

“It is a matter of great pride for me honestly,” he said. “Playing the 2015 World Cup, I never imagined this day because a World Cup is too far off, to think or predict anything, so I think I’m just feeling grateful that I’m in this position to have the opportunity to lead my country in a tournament like the World Cup.

It’s always going to be a time to remember and a very special feeling so I’m really looking forward to the challenge. It is a different kind of responsibility. You need to be able to absorb a lot more. So I think from that point of view it’s something that is really exciting me to have this kind of a challenge at this stage in my career.”

Asked about the occasion, and whether the World Cup is his biggest challenge as player and captain, Kohli said the feeling was no different from entering a Tests series against England or Australia.

“Honestly, for me, I have this feeling before every game that I play honestly and I can’t differentiate. Yes, if you just say the word ‘World Cup’, it brings a different kind of feeling to your mind and heart,” he said.

“I don’t think … apart from that when you step on to the field, as a cricketer, you really think like you are stepping into a World Cup game. Eventually, you go and play the game of cricket and that excitement and anticipation and a bit of nerves is the right combination that I have always had before every game that I play.

“2011, 2015, similar kind of butterflies in the stomach. Even when you walk into play in a Test match and you walk in at 10-2 you have the same butterflies in the stomach, so that is a very consistent factor and when that starts going down, you know what comes next. I’m glad it’s gone on and it is going on and I’m feeling excited, anticipation and a bit of nerves as well which is always good for any sportsman to have, so it’s pretty similar to the past.”

“When I walk out to bat, come down the stairs, people will say we need a hundred and all those kind of things will happen. So, for me, that’s just a part of the process now. It’s not something that I don’t want to hear, or something that I think people should not tell me because when you do well, people obviously want to see you do well again and again because they want to see the team win.

For many past cricket captains, World Cups have defined their legacies. Allan Border, Arjuna Ranatunga, Ricky Ponting, Wasim Akram, MS Dhoni, to name a few. Kohli expects the 2019 World Cup to he huge challenge, but is not yet drawn into talk of his own legacy being shaped by how India fares in England.

“Looking at the length of the tournament and the format of the tournament, yes, it will be tough for any captain, including myself, playing nine games. It’s a long tournament,” he said. “You are playing every side once and you have to think on your feet and adapt very quickly. It’s not a bilateral, you are not playing a team twice where you can play them once and plan again and come back and play them again.

“So you have to be precise. You have to think on your feet. On that day make good decisions and stay ahead of the eight-ball, so from that point of view yes, it will be a very, very challenging tournament. And as I said, it’s something that I’m looking forward to.” 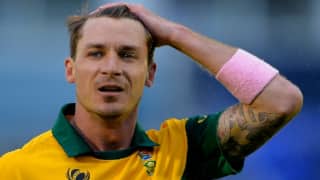 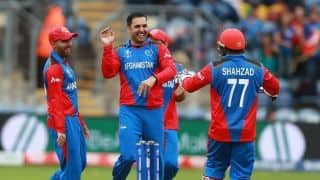