The talking points ahead of today's IPL 2019 Qualifier match between Delhi and Chennai.

Capitals have lost both of their IPL 2019 matches against CSK, who will fancy a hat-trick of wins today.

Ahead of the knock-out match, here are the talking points:

The battle of wits

MS Dhoni vs Shreyas Iyer. A cricketing genius, with two World Cups and three IPL titles to his credit, against a youngster leading a team in their biggest IPL match ever.

Dhoni is smarting after CSK’s loss to Mumbai Indians in Qualifier 1 and having masterminded both of CSK’s wins over DC this season, he is a force to reckon with. How can you forget his slog-overs assault and exceptional wicketkeeping when DC were bowled out for 99?

Iyer had captained Delhi into the IPL playoffs for the first time since 2012, and then got through two overs “of hell” against SRH as the franchise won its first ever knockout match.

Capitals have proven to be fast learners in IPL 2019, but whether Iyer can keep pace with and match wits against Dhoni could be a different kettle of fish.

Focus on Pant the finisher

Sanjay Manjrekar thinks he is this generation’s Virender Sehwag. Michael Vaughan believes that India have grossly erred by not picking him for the World Cup.

Rishabh Pant continues to divide opinions with his maverick approach to batting, and after he hit match-winning 49 off 21 balls, with five sixes, in the Eliminator the man himself made a bold statement: “next time I will finish it for the team“.

The man whom his team-mate Prithvi Shaw thinks is the best young finisher in the game will have plenty of eyeball on him today when CSK meet DC.

After the loss to Mumbai Indians in Qualifier 1, CSK coach Stephen Fleming identified the lack of runs in the Powerplay as the reason for the defending champions chasing a place in the IPL final. Super Kings have the worst record in the first six overs of a match in IPL 2019, in terms of runs scored and wickets lost (29), which has often left Dhoni with the tough challenge of scoring quick runs in the slog overs.

During Qualifier 1, CSK lost Shane Watson for 10 off the last ball of the Powerplay. That left them 32/3, and an eventual total of 131/4 in 20 overs proved insufficient to stop Mumbai winning by six wickets.

In 15 matches this season, CSK have only crossed 50 inside the Powerplay twice. Fleming hinted at a change in strategy for the knock-out match, while Dhoni called on CSK’s batsmen to step up.

Will we say some changes or a new approach today?

(VIDEO: Delhi Capitals square off against CSK for a place in maiden final)

Time up for Watson?

Despite Watson scoring 268 runs in 15 games, CSK have backed the struggling Australian opener. For Fleming, doing so is part of the franchise’ fabric.

Everyone will remember Watson’s exceptional century in the 2018 IPL final, but now, in a must-win match, against the team who has beaten the odds to reach so far, will CSK risk continuing with him especially after Fleming and Dhoni’s comments of needing better starts?

With Kedar Jadhav ruled out, CSK played Murali Vijay in the last match, but in the middle order. They could push Vijay up to open with Faf du Plessis and add Mitchell Santner as the allrounder, which adds depth to the lower order and gives CSK a very handy left-arm spin option.

In the last match he played, Santner took 2/13 in his four overs.

Trent Boult played Capitals’ opening match of IPL 2019 on March 24 and then did not get a game until May 1, after Kagiso Rabada was ruled out.

On comeback against CSK in Chennai, the New Zealand left-arm quick began excellently with two runs from his opening two overs, but then went for 34 in his last two overs as Dhoni upped the ante. In the Eliminator in Vizag, Boult conceded 37 runs in three overs.

On that surface, the faster the bowler the more the chances of him getting hit. Could it be time to sit him out again and add Chris Morris, the South African allrounder?

Morris has taken 13 wickets in nine matches for DC this season, and is one of the best slog-overs bowlers. Plus he can bat, something DC will really value today after the dramatic collapse versus SRH. 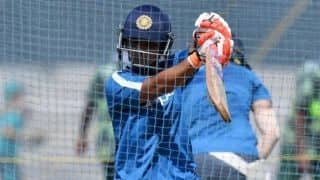 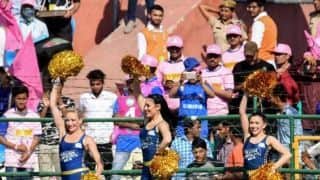