Although RCB lost the game, it wasn't enough to take away the smile from his face.

Chahal, who claimed a couple in his last couple of games, claimed three for 40 against Chennai Super Kings (CSK) on Wednesday. He dismissed the all important players, in the form of Brendon McCullum, Suresh Raina and MS Dhoni. He bowled a couple of overs during the powerplay and returned for the final couple during the death overs. IPL 2015 Highest wicket-taker: List of best bowlers in IPL 8

Although RCB lost the game, it wasn’t enough to take away the smile from his face as it reflected on being congratulated on his performance and claimed that Dhoni’s wicket was the special of all the three. IPL 2015 Points Table & Team Standings: Rajasthan Royals leads the table in IPL 8

“I enjoyed taking Dhoni bhai’s wicket. To get a batsman like him in the slog overs is huge. We know what he is capable of doing in those last few overs,” he said to iplt20.com. IPL 2015 Most 6s and 4s: List of most dangerous batsmen in IPL 8

It is believed that Chahal has a big heart and it is his this quality that helped him get the big wicket of McCullum in his opening over, despite bowling to the dangerous pair of McCullum and Dwayne Smith at the flat tracks and short boundaries of Bangalore. IPL 2015 Leading fielders: List of Best fielders in IPL 8

“[Daniel] Vettori sir had told me beforehand that I will be bowling with the new ball. It was our plan to stifle McCullum with spin early on. I was just trying to bowl accurately with a few subtle variations. I happened to bowl a slower wrong one and it got me McCullum’s wicket,” he said.

Although Chahald got initial success, Raina swapped him for three consecutive sixes. “Two of them went from the toe of the bat and this is a small ground. So, I wasn’t worried about those sixes,” he said.

Chahal is known to strike bat, despite getting hit for big and he proved it once again after claiming Raina’s wicket following those three consecutive sixes, as a part of lesson he learnt from Vettori.

“Virat [Kohli] and Vettori sir have given me a lot of confidence in that regards. Vettori sir tells us not to think about the ball you’ve been hit for. Forget about it and concentrate on the next ball. That really helps in a T20 game,” he said.

“Virat always tells me not to worry about being hit for sixes. He backs me to bowl whatever I want to bowl and keep a big heart,” he added. IPL 2015: Complete Coverage 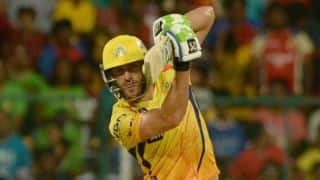 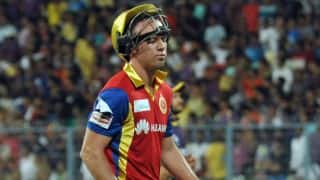