Kevin Pietersen was looking good despite the quick wickerts.

Kevin Pietersen was looking very good for Delhi Daredevils (DD) in their match against Kings XI Punjab (KXIP) in match 55 of the Indian Premier League (IPL) 2014. Parvinder Awana, bowling his third over, induced a leading edge from Dinesh Karthik, who was caught by Akshar Patel. Kedar Jadhav came in to bat at No 4.

Mitchell Johnson bowled the fifth over of the innings, and was greeted with another boundary by Pietersen. Johnson then induced a leading edge from Pietersen, but it evaded the fielders as Pietersen got three. Karthik took a single of the next ball to give Pietersen the strike, and he thrashed another boundary off the penultimate ball. DD scored 13 off the over.

Parvinder Awana came on for the fourth over. After facing three dot balls in a row, Pietersen hit Awana down the ground to get another boundary. He followed up with a single, and Dinesh Karhik hit the final ball for four more runs to make it nine off the over.

Earlier, Mitchell Johnson came on to bowl the third over, and induced an inside edge straight away. Pietersen survived and got a single. Mayank Agarwal flashed at the next ball, and Virender Sehwag in the slips accepted the easy catch quite comfortably. Dinesh Karthik came out as his replacement and hit a boundary off the first ball he faced. Kathik ended the over ended with another boundary off his pads.

Akshar Patel came on to bowl the second over of the innings. After giving just one run off the first two balls, Pietersen hit a boundary off the third delivery. Apart from that it was a quiet over, as only six runs came off the it.

Kevin Pietersen and Mayank Agarwal came out to open the innings for the Daredevils. Parvinder Awana started things off for Punjab. Pietersen took first strike, and managed only a single off the first two balls. Mayank Agarwal took a single off the first ball he faced. Good fielding from Akshar Patel off the fourth delivery prevented the ball from possibly being a boundary to Pietersen. The final ball resulted in a direct hit from Glenn Maxwell, but Mayank was safe. The ball went to the boundary for four overthrows to end an interesting first over. 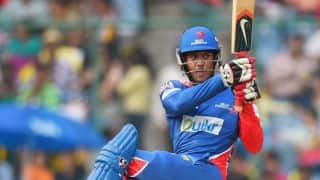