Abhimanyu hit 11 fours and two sixes in his knock, which set the platform for India Red to take control of the proceedings.

Bengal opener Abhimanyu Easwaran (102 batting) struck a superb ton to put India Red in a strong position on Day Two of the Duleep Trophy final against India Green in Bengaluru on Thursday.

Stylish right-hander Abhimanyu hit 11 fours and two sixes in his knock, which set the platform for India Red to take control of the proceedings.

Abhimanyu was involved in an 87-run opening partnership with captain Priyank Panchal (33), during which the two played some beautiful shots.

Karnataka’s Karun Nair, who has been in prolific form in the tournament so far, looked in good touch before being castled by Markande for 20.

Himachal batsman Ankit Kalsi (11 batting), who has a century to his name in the tournament, was giving Abhimanyu company when played ended on a stop-start day due to bad light.

Earlier, leggie Mayank Markande came to India Green’s rescue with the bat with a gutsy knock of 76 not out (121 balls). His 59-run last wicket partnership with Ankit Rajpoot (30 off 39 balls) took India Green to a decent total. He later took the wicket of India Red’s Nair.

India Green were tottering at 112 for 8 at one stage but made a superb recovery, thanks to Markande’s ninth-wicket stand of 60 runs with Tanveer ul-Haq and a half-century partnership with Rajpoot.

While Markande, overnight 32, did not miss out on scoring opportunities, Haq defended resolutely. Later, Rajpoot added to the score with some attacking shots.

Avesh Khan bowled well without much luck, with ‘keeper Ishan Kishan dropping a chance offered by Markande off the day’s first delivery. He ended Rajpoot’s resistance. 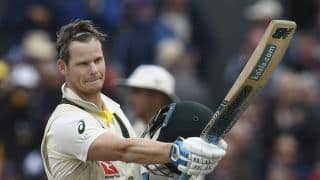