Dwayne Smith, Brendon McCullum start off well, Chennai Super Kings at 51/0 after 6 overs against Mumbai In

Both Smith and McCullum are looking good in the middle.

Dwayne Smith and Brendon McCullum have started off Chennai Super Kings’ chase of Mumbai Indians’ 141 for 7 superbly, scoring 51 for no loss in the first six overs in this crucial IPL 2014 encounter at Dubai. With not a huge target to chase, this start by Smith and McCullum could mean an easy chase for Chennai.

Having restricted the Mumbai Indians to a rather meager score of 141 for seven, Chennai Super Kings began their chase rather silently. They managed just two runs off the first two overs. Pragyan Ojha started the attack for Mumbai, and he started off with a maiden over. It was just the third maiden of the tournament so far.

Ojha’s good work was followed up equally well by Zaheer Khan who conceded just two runs off the second over. But then Dwayne Smith seemed to have had enough. After enduring the maiden by Ojha and managing just one run from five Zaheer Khan deliveries, Smith hit Ojha for two big sixes in the third over to get some momentum going.

The momentum further shifted to Chennai’s favour as 17 runs were taken off Zaheer Khan’s next over. Smith started the over with a huge six straight over the bowler’s head, and then McCullum hit him for two fours. 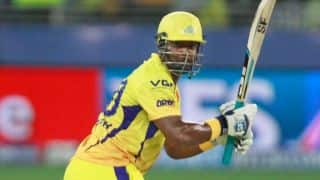 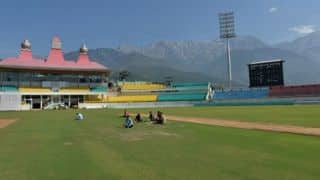