Chennai Super Kings are on course in their run-chase of 149 against Rajasthan Royals at the JSCA International Stadium, Ranchi in the Indian Premier League (IPL) 2014. Dwayne Smith is batting in the centre and along with him is Faf du Plessis. In nine overs, Chennai are 74 for two. Catch Live Blog of the Chennai Super Kings (CSK) vs Rajasthan Royals (RR), IPL 2014 match here.

Ankit Sharma bowled the seventh over and completed his spell. In four overs, he took two wickets and gave away only 20 runs. It was a decent day for him as he had earlier opened the batting and hit 30 runs. Catch the Live Scorecard of Chennai Super Kings (CSK) vs Rajasthan Royals (RR) , IPL 2014 match here

Later, Rajat Bhatia came on to bowl the eighth over and Smith carted him through wide long-on for a four. He then got an inside edge, which went through the keeper and it went for four. Pravin Tambe then bowled the ninth over. Tambe was scooped by du Plessis over third-man for a four.

Earlier, Rajasthan won the toss and chose to bat first. They made a couple of changes to the side as Ankit Sharma, Dishant Yagnik and Kevon Cooper have come in for Sanju Samson, Rahul Tewatia and Kane Richardson. Chennai made one change as Vijay Shankar replaced Mithun Manhas. Chennai then bowled well to restrict Rajasthan to 148 for eight after Shane Watson smashed a half-century. 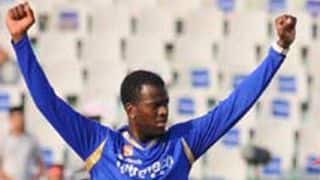