Night watchman Jack Leach was England's top-scorer in the match with 92.

Coach Trevor Bayliss admitted Sunday he had a “stern chat” with England‘s players after they rallied to avoid an embarrassing Test defeat to Ireland.

England were bundled out for 85 in the first session of their inaugural Test against Ireland at Lord’s but eventually won by 143 runs after dismissing the visitors for just 38 in their second innings.

Night watchman Jack Leach was England’s top-scorer in the match with 92 and although he was left out of the 14-man Ashes squad, Bayliss praised the left-arm spinner’s approach. “We had a fairly stern chat after the game,” Bayliss told BBC Radio.

“It’s good to be able to deliver those messages when you have actually won a game,” he said.

“I thought the example Jack Leach showed was the example a lot of the other batters need to learn from. He was very focused on what he wanted to do and was very clear in his own mind how he was going to go about it.

“We speak about that a lot, having a plan for any situation you find yourself in and being clear with your thoughts don’t try and just bluff your way through it.” (ALSO READ: Joe Root criticises ‘substandard’ Lord’s pitch after England beat Ireland)

England begin their Ashes Test preparations with an optional training session on Monday at Edgbaston, where the fitness of paceman Jofra Archer will be assessed following the side strain he suffered during the victorious ICC Cricket World Cup 2019 campaign. “We don’t want to necessarily risk him,” Bayliss said.

“He played for Sussex in a T20 match and came through that well. Test match cricket, five days, longer spells, is a little bit of a different beast so we’ll have to see where he’s at and take a little bit from the medical people as well.

“We have to weigh up, do you pick him for the first one, it’s a bit early, he gets injured and then is unavailable for selection? We’ve got a good strong group of bowlers who we think can do the job over the five Tests.” 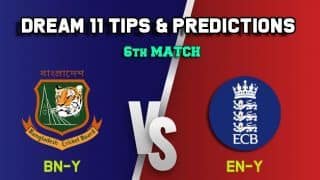 Dream11 Team Bangladesh U19 vs England U19, Match 6, U-19 Tri-series – Cricket Prediction Tips For Today’s match BN-Y vs EN-Y at Cheltenham