India chief coach Ravi Shastri has recently made it clear that he would like Rahul to play a lot of A games in order to regain form.

Wayanad: England Lions will be one of the innumerable stops that out-of-form opener KL Rahul will encounter in his road to redemption as he gears up to play for India A in the first unofficial Test.

The match will also feature two of India’s quickest bowlers in young Avesh Khan and the not so young Varun Aaron, who will be keenly watched by the national selection committee.

Virat Kohli wants three more fast bowlers which will broaden the base of the current pool of speed merchants and that’s the specific reason why injury prone not known for his consistency has been recalled.

It’s all about sheer speed and same for Avesh, who has really intimidated the domestic batsmen during the season.

Rahul hasn’t exactly set the stage on fire during the limited overs games having come back from an interim suspension for his sexist comments on a television chat show. (ALSO READ: It’s always not about results, not too worried about KL Rahul s form: India A coach Rahul Dravid)

India chief coach Ravi Shastri has recently made it clear that he would like Rahul to play a lot of A games in order to regain form.

The India A team’s head coach Rahul Dravid also backed the Karnataka opener and said he was not worried about the batsman’s run of low scores. (ALSO READ: Rahul Dravid bats for the need of alternative career options for young cricketers)

The India A team led by Ankit Bawne, comprising domestic performers, will be favourites against the Lions, who have not had the best of time on the tour so far.

Kerala allrounder Jalaj Saxena finds a place after a strong Ranji Trophy 2018-19 season as has Siddhesh Lad along with spinners Shahbaz Nadeem and Mayank Markande.

The visiting Englishmen, on the other hand, have had a tough time, being hammered in the five-match ODI series, losing 1-4 and will look for redemption. (ALSO READ: Sarwate reveals how he orchestrated Saurashtra veteran Cheteshwar Pujara s dismissal)

Captain Sam Billings, who played for Chennai Super Kings in last year’s Indian Premier League (IPL), has been in good form and will look to carry it into the longer format too. The young team includes players with Test experience, including Ben Duckett and Ollie Pope.

Lanky paceman Jamie Overton has impressed with his performances and will be assisted by Tom Bailey. The spinners Danny Briggs and Amar Vardi will have a big role to play on a track expected to be bowler-friendly on the evidence of the recent Ranji matches here featuring Kerala. 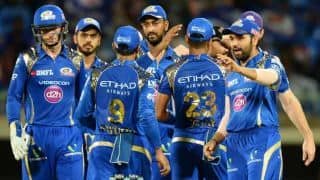