The $2 million earnings will be evenly split between the squad, regardless of matches played.

ICC Cricket World Cup 2019 runners-up New Zealand will divide the US$ 2 million prize money received equally among each member of the squad, irrespective of who played how many matches in England.

As per the New Zealand Cricket’s central contracts provision, any money won from tournament must be divided between squad members. This means that Black Caps skipper Kane Williamson, voted Player of the Tournament, will receive the same amount ($126,102 approximately) as the uncapped reserve wicketkeeper Tom Blundell.

As reported by stuff.co.nz, the prize money of $2 million received for being World Cup runners-up will be given to the team and support staff and not to NZC.

(READ: A ‘real shame’ the trophy was decided on boundary count – Kane Williamson)

Speaking to reporters in London on Tuesday, Williamson said he was still absorbing the emotions of an unprecedented result on July 14, which saw the World Cup final end with the scores level, which prompted a Super Over which ended with New Zealand level on England s 15. Eoin Morgan s team was crowned winners on the basis of having hit more boundaries in the match 24 to New Zealand s 16.

The Black Caps coach Gary Stead today said that the ICC needed to review its rules after a “hollow” final.

The other point of contention is England mistakenly given an extra run after a throw from Martin Guptill hit the bat of a diving Ben Stokes and deflected to the boundary in the final over of regular play at Lord s. England were awarded six runs but former umpire Simon Taufel said they should only have got five as the batsmen had not crossed for their second run when the throw was made. 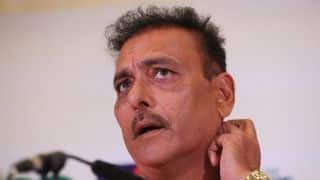