Former India skipper and one of the finest to have ever graced the game, Sunil Gavaskar, said that Gary Kirsten s, who was the Indian coach when the MS Dhoni-led side won the ICC World Cup 2011, presence will help the Bangalore-based Indian T20 league franchise.

The Virat Kohli-led unit has never been short on starpower but it has failed to win the coveted T20 league since its inception. Gavaskar though felt that the South African legend s inputs will be crucial for the team, who will kickstart their T20 league campaign against the Dhoni-led Chennai outfit. (ALSO READ: AB de Villiers lists five reasons why Bangalore are primed to deliver in this season s Indian T20 league)

The defending champions Chennai begin their campaign to retain the title with a game against their neighbours Bengaluru who have promised much but not quite delivered despite having two of the most destructive batsmen in the game. Their bowling has not come to the party, Sunil Gavaskar wrote in his column for Times of India.

This time they have Gary Kirsten as their coach and hope that his inputs will help in those key moments when the match is on the razor s edge and could tilt this way or that, added Gavaskar. (ALSO READ: It s a big possibility: Kohli on skipping matches for Bangalore)

Gavaskar cited Kirsten s stint as India coach and how he and Dhoni did wonders and how Kirsten s calmness will help balance out the things with hyper-emotional Kohli. (ALSO READ: Don t care whether I m going to be judged on winning Indian T20 league: Kohli)

When he was coach of the Indian team that won the World Cup he had the uber cool MSD as the captain and that combo was magic. Now, with the hyper-emotional Virat Kohli as the Bangalore skipper, Kirsten s cool quotient could just be the balance that the team needs, concluded Gavaskar. 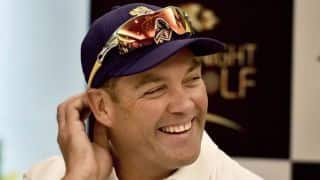 Team batting first at Chepauk will have a definite advantage: Krishnamachari Srikkanth