KKR outplayed MI by seven wickets in a match where the bat dominated the ball.

KKR outplayed MI by seven wickets in a match where the bat dominated the ball. If skipper Rohit Sharma led his side to 168 for three with his unbeaten 98 then Gambhir (57) and Suryakumar Yadav (46 not out) took care of the chase for the home team. But it was Morne who got the man-of-the-match award for his 2-18. Full scorecard: Kolkata Knight Riders (KKR) vs Mumbai Indians (MI), IPL 2015

“It was a tough total to chase, and the way we chased showed we were deserving winners. It was a very good wicket, but we never knew how it was going to behave. It was different to the usual wicket we see in Kolkata. The way Morne bowled, the way other guys bowled. Morne was exceptional. The way Sunil came back showed a lot of mental strength. Happy we have started the tournament on a high,” said Gambhir in the post-match presentation. READ: IPL 2015 Points Table

Even Rohit admitted that MI were a few runs short while batting first, “We were probably 10-15 runs short, but we should have done a little better with the ball. There was something for the bowlers still. We didn’t execute the plans well, but I hope the guys can pick it up and come out in a positive manner. The wicket was really good, you saw how easily they chased down 170. “It was a good knock, but ending up on the losing side doesn’t please you. I’m sure our guys can learn from the mistakes we made.” READ: Orange cap holder in IPL 2015

Morne, who got the all-important wickets of Aaron Finch (5) and Ambati Rayudu (0) to help reduce Mumbai to 37 for three credited the spinners for backing up his good work in front of the home crowd. Shakib Al Hasan bagged a wicket and Sunil Narine and Piyush Chawla did the containing act well. “With the new ball there was a little bit of swing. The rhythm was good, and I just needed to make the best use of it. READ: Purple cap holder in IPL 2015

It’s fantastic to be back here in front of an awesome crowd, and to get that first win out of the way. We expected the wicket to turn a little bit more, but the role the spinners played, in slightly tricky conditions, sums up the team,” he said. READ: Most dangerous batsmen in IPL 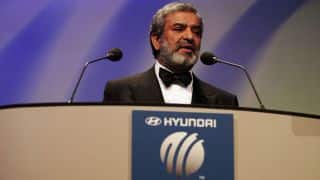