Maxwell cited the 2015 World Cup where he made stand-out contributions for Australia.

The allrounder Glenn Maxwell has termed his demotion in Australia’s ODI batting lined up “pretty valid” against the backdrop of criticism from the likes of Allan Border, who felt the Victorian was being wasted at No 7.

Over the past 12 months, Maxwell has batted at No 6 six times but in the last four ODIs has been pushed down a spot. Speaking on Monday at the Australian Cricket Awards where he was crowned T20 Player of the Year, Maxwell said his batting position was merited after his inability to cash in when sent in higher.

“The way that we’re setting up (as a batting unit), I don’t think I’m wasted,” the 28-year-old said. “The way we were trying to set up our team, it was pretty valid. I hadn’t done enough to warrant a place in the top four or five, and I missed my opportunities.

During the ODI series against India in January, Australia’s head coach Justin Langer defended the move to keep Maxwell at No 7. The vice-captain Alex Carey also backed Maxwell at No 7, insisting that having a hitter of Maxwell s ability at the back end of an innings was a big plus.

“I played a similar role at the World Cup and was able to be flexible because of the success of the top order, and the way they scored their runs,” he said. “It’s all well and good getting hundreds off a hundred balls, but the way our top order was going back in that World Cup, they were getting fast hundreds, they were explosive starts and we had six-and-a-half runs an over after 25 overs. So we had the freedom to (continue that) by sending ‘Maxi’ in, or we could consolidate with different batters and make sure we got a certain total.”

Australia travel to India for two T20Is and five ODIs this month. 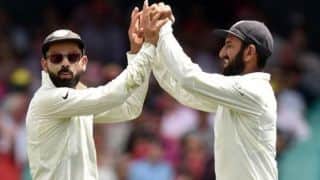