Yadav turned the tide in favour of KKR with Maxwell's dismissal.

Piyush Chawla came on to bowl the next over for the Kolkata Knight Riders (KKR) against Kings XI Punjab (KXIP)  in the Indian Premier League (IPL) 2014 Qualifier 1. Chawla bowled a very tight over to Wriddhiman Saha and David Miller, and went for just five runs off the over.

Umesh Yadav continued, and backed up his previous tight over with another good one. After going for just two off the first two balls, he beat Maxwell twice in two balls before getting him out LBW off the next ball to offer a huge blow to KXIP’s chances. The par score at the end of eight overs was 66, and KXIP were well below that.

Sunil Narine, bowling the seventh over of the innings, was hit for a boundary off the third delivery by Glenn Maxwell en route to taking seven runs off the over. It was not enough to stay above the par score.

Earlier, Morne Morkel bowled the sixth over of the innings. Manan Vohra hit a six off the second ball to jump to 26. However, off the fifth delivery, Manan top-edged one to Umesh Yadav, to boost the par score to 49 after six overs. KXIP were left at 46 for two at the end of that over.

Sunil Narine bowled the next over. And started off with a couple of dot balls. There was a slight drizzle and the covers were threatening to come on. The par score at the end of five overs was 37 runs. KXIP were struggling to get there, but Saha managed to get a boundary off the final ball.

Earlier, Morne Morkel bowled the third over of the innings. Wriddhiman Saha and Manan Vohra were tentative after the early loss of Virender Sehwag’s wicket. Saha hit a six off the final ball to take KXIP to 17 for one after three overs. 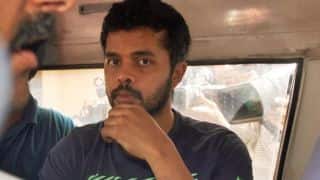 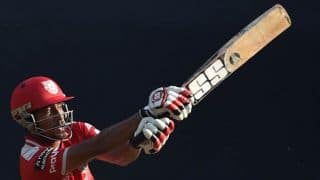