Brendon McCullum reveals that Phil Hughes' death broke down the New Zealand team from the inside.

Brendon McCullum, who recently retired from international cricket gave an amazing MCC Spirit of Cricket Cowdrey Lecture. In his speech, he spoke about how the death of Phil Hughes affected him and the New Zealand team. The kiwis were playing against Pakistan that time, and the news of Hughes’ death broke them down from the inside. They did not have any strength to play the match. They told the match staff about the same, but ultimately did play the game. It’s a striking revelation by McCullum. New Zealand team looked sad throughout the match, and did not celebrate the fall of any wicket either. Though New Zealand ended up in winning the match, they never played to their full abilities bowling hardly any bouncers. Hughes’ death continued to play in their minds, and they played with very little intensity. Brendon McCullum delivers MCC Spirit of Cricket Cowdrey Lecture: Full transcript

I want to talk now of the other really significant happening that affected my approach to the game. The events leading to it took place at the Sydney Cricket Ground on 25 November, 2014. On that day, Phil Hughes suffered injuries that were to prove fatal, playing for New South Wales against South Australia. Phil was a good man. He was likeable both on and off the field. The outpouring of grief that followed the tragedy were testimony to how much he was loved at home in Australia.

The New Zealand team was in Sharjah playing in a Test series against Pakistan when the news came through that Phil had been hit and was in intensive care. We were about to begin the third and final Test against a dominant Pakistan side; they had recently demolished Australia 2-0 at the same venues as we were playing. We had been well beaten in the first Test at Abu Dhabi. To put the thumping we received in context, it was the largest winning margin (by runs) by Pakistan against any New Zealand team; and we took just five Pakistan wickets in the match. READ: Brendon McCullum to deliver MCC Spirit of Cricket Cowdrey Lecture at Lords

We drew the second Test but certainly performed better. Going into the third Test, we were very conscious that we hadn’t lost a Test series since 2012, and we desperately wanted to preserve that record by getting a win at Sharjah to level the series. But even as an eternal optimist, I had my doubts that a Test win in the UAE is possible. Misbah won the toss and at the end of day one Pakistan were 280 for 3. Just before the start of play on the second day, the bombshell arrived – Phil had died. On hearing the news, my initial attitude was that we shouldn’t be playing. I looked around the dressing room and felt that no one wanted to be playing cricket. It had lost all meaning.

There was also the realisation that it could have been any one of us. None of us ever anticipated that someone could die from a cricket ball, not in this day and age. I always wanted our fast bowlers roaring in, having a winning attitude; intimidating, ready to exploit any lack of certainty or technique in a batsman, but not at the expense of someone’s life. Cricket was meant to be a game, not a life or death struggle. It hit us all hard that for Phil, it had become exactly that. Brendon McCullum: AB de Villiers’ presence will boost CPL 2016

Mike Sandle, Mike Hesson and I spoke to the match referee, Andy Pycroft from Zimbabwe. We told him we didn’t want to play. The umpires were Paul Reiffel and Rod Tucker, both Australians. They were broken and barely able to leave their room at the ground. It was decided that we should take the day off and see how things looked the following day. That night I rang Gilbert Enoka and told him that I didn’t know what to do. Gilbert is a sports psychologist in New Zealand who is held in very high regard. He has worked with the All Blacks and New Zealand cricket teams for years.

I explained to Gilbert that we had a group of men who were shattered and wanted to get on a plane home as soon as possible. It didn’t feel right to continue playing, but we knew there was a good chance we’d have to. We were the only international game underway at the time and I felt we had to plan for the fact that we may be told we had to carry on. Gilbert was incredible. He said we should not judge anything that anyone did during the week, and that people should grieve in their own way and concentrate their energy and emotions on themselves rather than the team. IPL 2016: Dwayne Smith and Brendon McCullum together is like a dagger which cuts both ways

He told me to try and bring everyone together; to try to lighten the mood if at all possible. Most meaningfully Gilbert said: ‘All your preparation, all you have ever thought about in cricket, just throw it out the window for this one game.’ In saying this, it was like Gilbert took the weight off my shoulders and gave me a way to deal with what was happening – to realise that there were no rights or wrongs and the rule book could be thrown away.

That night most of the team shared a few beers in my room. The mood lightened at times but there was such a profound sense of disbelief, shock and sadness. We knew had to be at the ground the next day but deep down I think we all hoped the game would be abandoned and we’d be heading home. Soon after arriving at the ground we were told that the game was going ahead, like it or lump it. The decision had been made for us. Looking back, I think this was the right decision but, at the time, it seemed wrong. In our dressing room there were a number of players weeping uncontrollably. It was to remain a common theme – as we walked onto the field the tears rolled down the faces of many of the lads and this continued sporadically during the day. READ: Brendon McCullum urges ICC to be ‘professional’ in dealing with players alleging match-fixing

As a captain, I felt unable to protect the team and, as we stood in the middle before play began, I apologised to them for having to play. I fell back on Gilbert’s words; ‘All your preparation, all you have ever thought about in cricket, just throw it out the window for this one game.’ I reminded the team that there would be no harsh judgement on any player’s performance and no consequences for failure. I believe that what motivated us was Phil Hughes. We knew we had to play and we would do that as best we could, to honour Phil and the game itself.

The outcome of the ‘uncaring’, no-consequence play was a revelation to me. I suspect it was something I had been trying to achieve on a personal level for years; but I had been unable to do so, except for fleeting moments. Here there was a release of many of the external factors that can creep in and influence a player. There was an instinctiveness that took over – no fear of failure, just playing and being ‘in the moment’.

From 281 for 3 at the end of day one, and 311 for 5 at drinks in the first session of what was effectively day two, Pakistan lost their last six wickets for 40 runs; and that opened the door for us, a little. We put together 690 runs, the biggest total ever by a New Zealand side and the second-highest score against Pakistan by any team. As a team we averaged nearly five runs an over and we hit 22 sixes; a world record number in a Test innings. In my new-found mental freedom, I managed a double-century and Kane Williamson scored a much finer 192.

Pakistan were all out for 259; a splendid win by an innings and 80 runs and the Test series was squared. This test was New Zealand’s first win against Pakistan in Asia in 18 years, and the first innings win by New Zealand against any team in Asia in 30 years. The way that Phil’s death affected what happened didn’t go unnoticed by those who witnessed it. Cricinfo saw it this way: ‘The Kiwis were badly affected by the incident and didn’t even celebrate any of their achievements. A remarkable thing to note here is that they barely applauded a wicket. Consider this: just the two bouncers bowled today and no close-in fielders in front of the wicket! Takes some doing and still they won the game in four days to level the series 1-1… full marks and hats off to the Kiwis for the spirit they have shown throughout the series. Certainly an example set for all the other sides to follow and act upon. Long live their attitude!’ 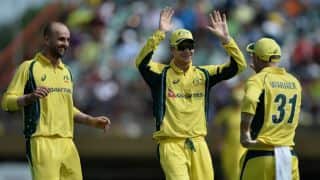