Shankar, who had some decent performances with the bat during the New Zealand leg, now wants to finish games like Dhoni.

Chennai: Vijay Shankar, who has made a strong case for himself to be included in India’s ICC World Cup 2019 bound squad, feels that his biggest takeaway from the Australia and New Zealand series is learning the “art of chasing” from none other than Mahendra Singh Dhoni.

Shankar, who had some decent performances with the bat during the New Zealand leg, now wants to finish games like Dhoni.

“I was happy to be around with the seniors. Just watching them prepare for matches and learning. Moreover, I learnt a lot by watching Dhoni during run chases. I learnt a lot about how to pace an innings, especially during chases. I learnt about his mindset,” Shankar, who returned on Monday, told PTI during an interaction. (ALSO READ: MS Dhoni’s experience can’t be questioned, there are not many better than him: Lakshmipathy Balaji)

For him, it was like living a dream as he shared the dressing room with Dhoni, Virat Kohli and Rohit Sharma.

“It was a great experience to share the dressing room with names like Virat Kohli, MS Dhoni, Rohit Sharma. It is important to watch and learn from the seniors in the team,” the soft-spoken Shankar said.

Shankar, who had confessed after the final T20 International that he was surprised when promoted up the order to No 3, said that he was specifically told by the team management before the start of the series.

Though he got a few 40s, Shankar lamented that he couldn’t take the team home during the final T20 International.

“I thought I should have got more runs. Also, I felt disappointed that I could not take the team home in the third T20. I had the chance. It is a learning experience for me. I need to adapt faster and also be consistent,” he added.

He got an important partnership with Ambati Rayudu in Wellington ODI when India were 18 for 4 and he cherished batting in challenging conditions. “When I walked in at 18 for 4, it was all about playing time and building a partnership (with Rayudu). It was a good challenge as the New Zealand bowlers were bowling well. We had a good partnership. I should have gone on and made a big score,” he added. (ALSO READ: ‘India should include Rishabh Pant in the playing XI for the World Cup’)

The Tamil Nadu allrounder, who has been around the India ‘A’ set-up for a while before graduating to the senior side, said his focus is on constant improvement while adding that he saw every match as an opportunity to do well.

“I have done the hard work and got the opportunity in the national team. Now my focus is on constant improvement. I have to step up and do well in every match I get to play. I see each game as an opportunity to do well,” he added.

Asked about chief selector MSK Prasad’s recent remark that he was in the reckoning for a spot in the World Cup squad, the all-rounder played it down.

“I don’t want to think too far ahead. I want to do well in every game. Every day is important for me,” he said.

“I still need to fine-tune a few things. I will also work with my childhood coach S Balaji, a former ICF cricketer, with whom I have worked for more than 13 years, whenever I am in Chennai,” he added. (ALSO READ: Virat Kohli is the best leader of men, not the greatest tactical captain: Shane Warne)

The 28-year-old Tamil Nadu cricketer, who made his ODI debut against Australia at the Melbourne Cricket Ground before the New Zealand series, said it was a big thing and “a happy feeling” to get started at an iconic venue.

“Yeah, to make my ODI debut at the MCG was a big thing and a happy feeling. Having watched so many matches and dreamt of playing at such venues, I was delighted to play there,” he added. 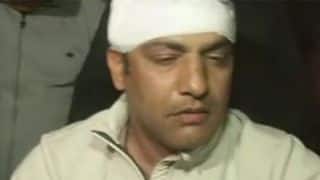