Olivier grabbed eyeballs with his Man of the Series performance against Pakistan that saw him scalp 24 wickets in the three Tests.

He was pitted as South Africa s most prized possessions and was well in line to succeed Dale Steyn and Vernon Philander, but all that came crashing down when fast bowler Duanne Olivier turned his back on the Proteas after signing a Kolpak deal with Yorkshire last month. (ALSO READ: Duanne Olivier quits South Africa to join Yorkshire)

Olivier, who grabbed eyeballs with his Man of the Series performance against Pakistan that saw him scalp 24 wickets in the three Tests, became the 43rd South Africa cricketer to quit their homeland for Kolpak contract. He rejected a two-year central contract from Cricket South Africa (CSA) to move to England. (ALSO READ: Kolpak: The biggest threat to South African cricket)

In a shocking confession, Olivier revealed that he would like to play Test cricket for England. For that to happen, he would have to obtain British citizenship a process that could take over five years but he s content with his decision.

“I realise some people will understand and some people won’t at all, but it doesn’t really faze me what they think. At the end of the day, it’s about what I want to do. I want to see things going forward and I feel like my cricket will improve playing county cricket.” (ALSO READ: Cricket South Africa expresses disappointment after Duanne Olivier signs Kolpak deal)

According to the report, Olivier s salary at Headingley will be close to 150,000- 100,000, which is roughly three times as much as what he would have earned as a South African international. Every person needs security, he said.

“I accept that my Test career is over for South Africa but if I do well, hopefully in the future, I can play for England,” he added.

“I am a firm believer that everything happens for a reason and if you just concentrate on doing well that will take care of itself. I don’t think too far ahead.

“Yes, it will be a goal to play for England one day and it would be amazing but for now my pure focus is on Yorkshire and just doing well for them.” 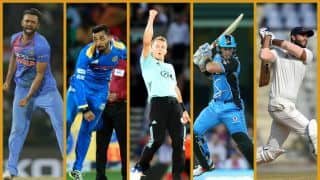