Azhar Mahmood is bursting with pride after seeing Pakistan's phenomenal improvement in all departments of the game.

Karachi: A week after Pakistan clinched their maiden Champions Trophy title with a crushing win over their arch-rivals India, bowling coach Azhar Mahmood is bursting with pride after seeing his side’s phenomenal improvement in all departments of the game. Following a 124-run defeat against India in the opening Group B clash, Pakistan had bounced back strongly in the tournament as they hammered South Africa, Sri Lanka in the group stage before defeating favourites England in the semi-final to once again set up a clash against the Virat Kohli-led side. Subsequently, Pakistan delivered an all-round performance against India, winning the finals by massive 180 runs at the Kennington Oval to lift their maiden Champions Trophy title. ICC WWC 2017: Sana Mir hopeful of riding on wave of success set by Pakistan men s team

Reflecting on the same, Mahmood said that their turnaround was not new and that it was also present during their last ODIs and Test series against West Indies. “Our improvement in all departments was phenomenal and whether it was batting, bowling or fielding we seemed to click at the right time to win the trophy. The improvement we saw was not only there in the way we turned around our fortunes during the Champions Trophy, but this was also there beforehand with our performances in the West Indies series where we showed great energy not only in ODIs but also in the Test matches as well,” Pakpassion.net quoted Mahmood as saying.

“There is no better feeling than knowing that we have won the ICC Champions Trophy or any major tournament for that matter. One can only praise the Almighty for His reward for our hard work before and during this tournament not only in our bowling but in the overall sense,” he added. Insisting that they were written-off from the tournament following India’s defeat in the opening round, the former all-rounder said that he felt quite disappointed to see that no one credited his side for the hard work they had put in during the tournament. Pakistan PM announces cash reward of 10m each for ICC Champions Trophy 2017 winners

“As a coach involved with the winning side, this is the best feeling one can have, but it gets better if we consider the fact that we won the final against our arch-rival India and lifted the Champions Trophy. We did so, at a time when no one gave us any chance of success. No one gave us any credit for the hard-work we put in as we prepared for this tournament and we were written-off after our defeat to India in the tournament opener,” he added.

Mahmood also heaped praise on his side’s overall performance, saying that both young as well as senior players responded really well to their objective of playing good brand of cricket. “It was a team effort at the Champions Trophy and especially pleasing if we consider the fact that this is a young team which helped us win. The lads represent the future for Pakistan but it was also great to see the seniors responding well. So, players like Shoaib Malik and Mohammad Hafeez responded really well to our objective of playing the brand of cricket which we now want to play,” he said. Shahid Afridi: Pakistan needs to be consistent and continue the winning ways

The victory also saw Pakistan leapfrog Sri Lanka and Bangladesh to surge to the sixth spot and move closer to direct qualification for the ICC Cricket World Cup 2019, for which host England and the next seven highest-ranked sides as on September 30 will get straight entries. The Sarfraz Ahmed-led side gained four points to move to 95 points as its wins over higher ranked opponents in the tournament included the one in the final against India and an eight-wicket semi-final victory over England. 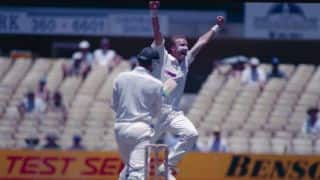