“I’m sure the whole world knows about him. He’s just an unbelievable player; for me the best player in the century,” said Tahir of a man who also holds the record for the fastest one-day century off 31 balls, against the West Indies in Johannesburg in January. ICC Cricket World Cup 2015: Complete Coverage

“I’m just really happy that I’m playing with AB de Villiers and not against him,” added Tahir, who admitted he’d struggle to know the best way to bowl to de Villiers if he was on the opposing team. Top 10 batsmen in ICC Cricket World Cup 2015

“I’d probably bowl him a beamer or two, two beamers, and I’m out. Top 10 bowlers in ICC Cricket World Cup 2015

“It’s just a great honour to watch him every day in the nets.”

Tahir was overshadowed by de Villiers’ one-man demolition job at the Sydney Cricket Ground on Friday. But he played a major role with the ball, bamboozling the West Indians with his leg-spin which gave him a career best 5-45.

It took his One-Day International (ODI) haul to 64 wickets at a miserly average of just 19.40. Top 10 fielders in ICC Cricket World Cup 2015

The Lahore-born slow bowler only made his South Africa ODI debut in 2011 at the last World Cup where he finished as the team’s second highest wicket taker.

He also made his Test debut in the same year after satisfying residency requirements while his skills have been in demand worldwide, playing for a host of clubs in Pakistan and South Africa, the Indian Premier League (IPL) as well as three English counties — Middlesex, Hampshire and Yorkshire. Top 10 wicketkeepers in ICC Cricket World Cup 2015

“I just like challenges. I have had a lot of in my life, and then when it comes to that, I think I can be ready for anything,” said Tahir.

“I’m just really honoured to play for South Africa. Just to be part of this team is just a special feeling, and when you walk into the middle with green and gold, I don’t know what to say, I just want to take probably 10 wickets every game.” ICC Cricket World Cup 2015: Pool-wise Team Standings 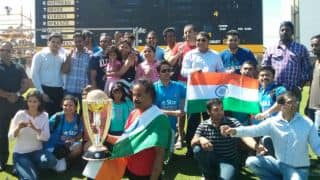