Pujara, Dhawan put on fifty partnership to give India realistic chance of chasing 407.

A remarkable fightback from India saw them end Day Three on 87 for one, needing 320 more to win the first Test against New Zealand at Auckland on Saturday. It was an bizarre day of Test cricket which saw 17 wickets fall for 264 runs and one team conceding a 301-run lead and the other crashing out for 105 runs. Shikhar Dhawan is batting on 49 and Cheteshwar Pujara is unbeaten on 22.

But at the end of the day, India will walk away with some confidence in mind of staging a comeback which has been tilted towards the Kiwis. In hindsight, Brendon McCullum would have chosen to rethink his decision of not to enforce the follow-on despite securing a massive lead. But a poor outing in the second innings for the Kiwis has left the game in balance with an assured performance from India so far in the run-chase.

India resumed the second morning with an aim to avoid the follow-on, still 173 behind then. But the initial cautiousness of Rohit Sharma and Ajinkya Rahane vanished when both played some loose stroke to give their wicket away. There was hardly any resistance from the lower order falling one after the other. With the moisture on the wicket thanks to the rain on the previous evening, Tim Southee and Trent Boult looked menacing, getting the ball to move to their will. Once they broke the 79-run stand between Rohit and Rahane, Neil Wagner chipped in by cleaning the tail and bagging four wickets overall in the match.

With such a lead, skipper McCullum was in a dicey situation and eventually went in favour of batting again and pile on an insurmountable target for India. But the decision backfired just few overs into the innings. Mohammed Shami who was unlucky not to get much wickets despite maintaining a disciplined line, got his rewards early this time around. He trapped Hamish Rutherford leg-before for a duck with a peach of a delivery that held the leg-stump line. Shami didn’t have much planning to do for Peter Fulton as he blindly drove a length ball straight into the safe hands of Ravindra Jadeja. Indians sniffed a chance but the in-form batsmen Kane Williamson and McCullum looked set to anchor the innings once again. Just 20 minutes later, India walked back for lunch with both the in-form batsmen dismissed thanks to a committed effort from Jadeja.

Soon after the break, India continued their momentum with Shami bagging one more. A brief partnership led by Ross Taylor (41) came to an end when he edged to Rahane at slips. It was a collective bowling effort with Ishant Sharma too not giving away an inch. The wickets kept coming frequently as New Zealand slipped to 80 for nine. The last-wicket pair added a few runs before perishing.

Beginning their chase, the openers went about contrasting fashion with Murali Vijay opting to be cautious while Dhawan eager to see the ball to hit the middle of his bat more often. The left-hander struggled at the start but as the runs came by he settled in and became much more patient. Vijay was unlucky to be caught down the leg-side off Southee for 13. That brought Pujara, who looked stubborn enough not to give his wicket away easily unlike in the first innings. Soon the booming drives from Dhawan were visible and the partnership flourished without any risk. Dhawan’s confidence was visible when he chose to smash a straight drive in the last over of the day to bring up the fifty partnership.

With 320 required and nine wickets in hand, India have given themselves a realistic chance of chasing the mammoth target. 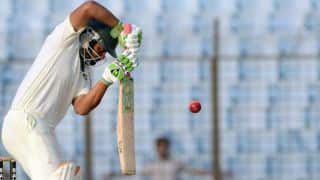