Batting coach Sanjay Bangar praised the batsmen adjusting well to the surface and making technical changes in their approach.

Impressed with India s performance on the opening day of the Trent Bridge Test, batting coach Sanjay Bangar praised the batsmen adjusting well to the surface and making technical changes in their approach. India experienced their best day of the series on Saturday, where openers Shikhar Dhawan and KL Rahul provided the team a solid start that was continued by Virat Kohli and Ajinkya Rahane. India ended the day at 307/6, their highest total of the series.

“The most important thing was the opening partnership was according to our expectation,” Bangar said. “In the previous two Tests we were losing two or three wickets inside the first 15 overs. Because of that the middle order was walking in early in difficult conditions. It was not just the start but also the way they were batting was good.”

Marking his return to the side after being dropped from the second Test at Lord s, Dhawan batted well before edging to third slip. Overcoming a testing spell from James Anderson, once Dhawan got his eye in, started producing frequent boundaries. Most importantly, he looked in control during his 65-ball 35 that contained seven boundaries. His partner KL Rahul aided well as the two put on India s highest opening partnership in Tests outside Asia and the West Indies since December 2013.

“The way Shikhar made the changes to his batting, the way he reduced his bat speed, the way he played the ball later, these adjustments he made in the last six or seven days, he should get credit,” Bangar said. “KL Rahul, too, was playing on the back foot, he was reacting after the ball’s movement. These changes the batsmen have made make me hopeful for the rest of the series. With five more innings left, if our batsmen can play in the same way, their performance graph will carry on to improve.”

Initially, a few balls kept low, but once Dhawan brought out the cuts, it seemed to look quite comfortable for the Indian batsmen. 307 was also India s third-highest total on the opening day of the Test match, behind the 375 they scored against New Zealand in Wellington in 2009 and 372 against South Africa at Bloemfontein in 2001.

“We all realise that the outfield is very, very fast here in Nottingham. So you get value for your shots. Because the ball is swinging, the way it has been, you always have a lot of players in catching positions. It leaves big gaps in the field, so if you get bat on ball, time it well, there is always value for. I don’t think any side can control run rate here beyond a certain limit because value for shots, it is a fast outfield, anybody timing the ball will get value for shots.”

And of course, after the promising start by the openers, India were guided forward by the Kohli-Rahane show. Their stand of 159 was India s highest on English soil since Sourav Ganguly and Sachin Tendulkar put on 249 back in 2002. Kohli missed out in his century by three runs, and while his was an equally captivating innings, Rahane s return to form stood out as India s biggest gain, scoring his first Test half-century in 14 innings.

“His mindset was very clear,” Bangar said. “He was very positive, and his feet were moving well. He was getting into good positions… at times there can be a lapse in concentration which can lead to losing your wicket, which had happened in the previous Test. But he seemed to be in good nick and he capitalised, put us in a good position and he would be hurting because a big score was on the cards.” 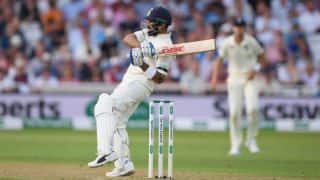 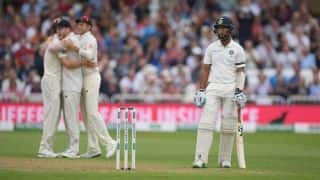 Cheteshwar Pujara’s mind has been messed up: Sunil Gavaskar