According to Gavaskar what separates Kohli's men from earlier teams is their world class fitness standards.

India won the four-match series 2-1 after the Sydney Test ended in a rain-forced draw, their first ever Test series triumph on Australian soil. What the weather could not hide was Australia’s poor performance with both bat and ball through the four matches. (India vs Australia, 4th Test, Sydney: FULL SCORECARD)

It was attributed to batting mainstays David Warner and Steve Smith‘s one-year ban on ball tampering charges but Gavaskar rejected the assertion.

“It is not India’s fault that this Australian team was without David Warner and Steve Smith. Australia could have handed them shorter bans but obviously it was thought that one-year bans would be good for Australian cricket, that they needed to be made an example for anyone who brings the game into disrepute,” Gavaskar said during a post-match show on ‘Sony Six’.

“India played the opposition they were presented with and it’s a great achievement for them,” the former captain added.

According to Gavaskar what separates Kohli’s men from earlier teams is their world class fitness standards. “It is not that teams that I was a part of didn’t play to win. We also played to win but this team is at a different level in terms of fitness and the captain has shown the way. In our times, we used do our individual routines,” recalled Gavaskar. 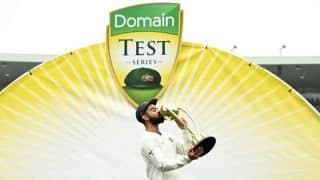