India s batting was expected to outshine Australia's, but it was the bowlers who stood tallest.

SYDNEY: As much of a damp squib as the ending was, it did little to take the sheen off India s history-rewriting tour of Australia. The elements, and the strange and increasingly archaic rules in which cricket continues to place its faith, deprived them of the opportunity of opening up a score line that would have been a more appropriate reflection of their hold.

But 2-1 isn t a shabby result, not after the heartbreaks in South Africa and England last year when Virat Kohli s men walked shoulder to shoulder with their opponents for large pockets before stumbling badly and yielding ground.

Not without justification did India arrive in these shores a month and a half back as the overwhelming favourites to register their first series win Down Under. For 71 years, that feat had remained elusive. India were occasionally competitive, but mainly came to Australia like lambs to slaughter, meek and submissive, beaten in their minds long before the first ball had been hurled in anger. (ALSO READ: India report card: Pujara, Bumrah orchestrate landmark series win)

If there was cause for optimism this time around, it was because of the rounded look to the bowling attack of a country hitherto heavily dependent on batting riches and spin bowling resources that were invariably blunted as the primary attacking weapon. The presence of a rich and varied pace-bowling arsenal it s not often that this term has been used while describing India s attack which had shown itself capable of blasting out 20 wickets in conditions favourable and otherwise was the cornerstone around which India sought to construct their dreams. For once, reality matched expectations, hype was justified by deeds, style was complemented by substance as the pace unit with Jasprit Bumrah as the spearhead comfortably out-bowled their more celebrated Australian counterparts. (ALSO READ: How the series was won)

For all of Australia s batting woes, further exacerbated by the suspensions of Steve Smith and David Warner, the hosts still possessed a potent bowling quartet. Mitchell Starc, Josh Hazlewood and Pat Cummins have been touted as the dream team of quicks ever since the last-named returned from a prolonged injury-enforced break in Ranchi in March 2017. Nathan Lyon is among the premier spinners in the world, dangerous everywhere but particularly a handful at home, where he thrives on the bounce his over-spin can extract from hard surfaces. The pace trio was quick and skillful with old ball and new, Lyon was the master of keeping up the pressure, benefitting from batsmen being worked over by the quicks but also adept enough with his own craft to entice the best in the world to their unsuspecting doom. (ALSO READ: ‘Best Indian team I’ve been part of’: Pujara)

The genesis of India s victory lay not merely in the felicity with which their bowlers worked their way through Australia s batting, but also in the manner in which they blunted the Australian attack at all venues except the new Perth Stadium. More encouragingly, for the first time away from home since the start of 2018 and the three-match series in South Africa, it wasn t around their mercurial captain that the batting revolved.

Despite the array of batting riches at their disposal, fortified by experience gained by playing around the world including more than once previously in Australia, India seemed heavily dependent on Kohli s form, not unlike in the late 1990s and early 2000s when the opposition felt that if they prised out Sachin Tendulkar, the rest was just a matter of time. Kohli himself, more than anyone else, will be thrilled that the batting fulcrum was Cheteshwar Pujara, who started last year with a cloud hovering over his overseas form.

Casting aside misplaced criticism of his conservative approach and sticking to the game plan which has made him such a competent batsman for most part of his storied international career, Pujara re-established himself as the rock. His reassuring presence emboldened the others to bat around him; Pujara s 521 runs, studded with three characteristically unfussy hundreds, came in more than 31 hours of batting time, reiterating the value of patience and dogged determination in the five-day cricket even as the onus otherwise perceptibly seems to be shifting towards runs at the expense of occupation of the crease.

Kohli wasn t inconspicuous, his Perth hundred a brilliant illustration of how far along the path to batting greatness he has come. But he wasn t even the second highest scorer for his team. That honour went to the feisty Rishabh Pant, who has taken Australia by storm with his cheeky combativeness and his blas comments from behind the sticks. In the success of Pant, the second-choice stumper, and that of Mayank Agarwal, the fourth-choice opener who grabbed an unexpected lifeline with sparkling half-centuries in his first two Tests, lies a story. Australia, clearly hurting from the non-availability of Warner and Smith, had little left in reserve; India s batting reserves outperformed the hosts original choices. When you go through a four-Test home series without a single centurion, it is well nigh impossible to chase the pot of gold at the end of the rainbow.

India s batting was expected to outshine the Aussies. The bowlers, surprisingly to only those who haven t charted their progress in the last 12 months, pretty much did the same they out-swung, out-seamed and outwitted their counterparts, striking with the new cherry but also using the older ball with far greater impact. The reverse-swing that once used to be a telling Starc ally was conspicuous by its absence, negating Australia s pace designs past the 20th over and necessitating Lyon to slip into the twin roles of stock and shock bowler. With increasing workload and tired fingers, Lyon s bowling started to lose its bite, another box ticked by Pujara s obduracy and steadfastness of purpose.

Bumrah was easily India s strike force, finishing as the joint highest wicket-taker alongside Lyon with 21 scalps, while Mohammed Shami and Ishant Sharma were no less effective even if they didn t match the junior tyro in numbers. R Ashwin was excellent in the first Test, Ravindra Jadeja as reliable as ever in matches three and four, but again with the future in mind, Kuldeep Yadav s five-for at the SCG, in his first Test bowl in Australia, will remain the spinning highlight. The left-arm wrist spinner, still only 24, will at some stage in the near future surge ahead from being the third-choice spinning option in duration cricket, that much is obvious.

The breaking of a 71-year duck on Australian soil seemed inevitable from the time India sealed Adelaide by 31 runs. Perth was an aberration, Melbourne and Sydney till the washout affirmation of India s vast superiority over a one-time cricket giant now struggling to stay afloat. Kohli, and several of his team-mates, spoke glowingly of the domestic structure that has facilitated India s current standing as an all-weather force, even if the skipper himself hasn t played domestically for a long time now. Australia, by contrast, have junked Sheffield Shield cricket for the time being to allow the 20-over Big Bash League to run its course in the middle of Test commitments.

The acknowledged trail-blazers are inexorably hurtling towards cricketing doom unless they clean up their act quickly. As for India, while this 2-1 victory might seem the realisation of a dream, it could just be the first emphatic step in the journey towards world domination. 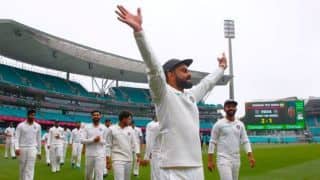