12:21 pm: Stumps! Australia finish the day on 24/0 in replay to India’s 622/7. They trail by 598 runs. Must have been waiting for the day to end eagerly as they had to toil hard for a second day in a row. India have dominated the proceedings and had Pant taken a catch to dismiss Khawaja, it would have been a perfect end. But still a lot of time left in the Test. Australia have to put up their best foot forward.

11:53 am: DROPPED! Usman Khawaja dropped on 0 by Rishabh Pant off Mohammed Shami. it was a regulation catch. Australia 11/0, trail by 611

11:40 am: Indian team with their customary huddle. Marcus Harris and Usman Khawaja are the two Aussie openers. Mohammed Shami with the new ball.

11:33 am: WICKET! Ravindra Jadeja has been bowled by Nathan Lyon for his fourth victim. And there comes the signal from captain Virat Kohli. India declare at 622/7. Jadeja out after hitting 81. Rishabh Pant remains unbeaten on 159.

11:28 am: 150 up for Rishabh Pant. This is the highest score by an Indian wicketkeeper in away Tests. He is now toying with the Australian pacers, as he belts three fours in an over of Hazlewood.

11:06 am: The highest score by an Indian wicketkeeper outside India is 148 by MS Dhoni. Rishabh Pant is currently batting on 140. Judging by how things have gone so far, he should overtake the former Test captain.

This has been one-sided affair

This is India’s highest total in a Test outside of Asia since the tour of England in 2007 when Rahul Dravid s team stacked up 664 at The Oval. #INDvAUS

10:50 am: Ravindra Jadeja has completed his 10th Test half-century. And he celebrates it in his own inimitable style. Out comes his bat and puts on his sword celebration.

10:28 am: Pant and Jadeja have built a century stand for the seventh wicket – the third such partnership for India during the innings. India 528/6

10:16 am: HUNDRED for Rishabh Pant! His second in Test cricket as he becomes the first Indian wicketkeeper to hit a Test century in Australia.

10:13 am: So Rishabh Pant has overtaken Kohli’s tally of 282 runs in the series. He’s now the second highest run-getter behind Cheteshwar Pujara now. India’s total has gone past 500 runs as well.

10:04 am: The play resumes. Pant and Jadeja are the two unbeaten batsmen. Lyon to start the proceedings of the final session.

9:27 am: 50-run partnership between Pant and Jadeja for the seventh wicket.

9:12 am: Pat Cummins drops one short and Ravindra Jadeja cuts it over the backward point region to take India padt the 450-run mark.

9:08 am: Rishabh Pant charges forward and lifts one from Nathan Lyon over mid-off for his fifth four. India 448/6

8:56 am: Rishabh Pant is taking more risks now. Seems like it was Pujara’s influence that had kept him from playing rash strokes. Since his dismissal, he has become more adventurous.

8:42 am: So after Pujara’s epic, Rishabh Pant has completed his third half-century in Tests. India 429/6 in 133 overs. He has been joined by Ravidndra Jadeja.

8:27 am: WICKET! That’s a rather tame dismissal to such a phenomenal innings. Cheteshwar Pujar charges forward and ends up hitting one straight into the hands of bowler Nathan Lyon. He scored 193 off 373. SCG applauds. India 418/6

8:08 am: Pujara dropped at first slip by Khawaja. With eight runs away from completing his double-century, Pujara decides for a late cut and the ball flies to the right of Khawaja but he only managed to palm it.

7:41 am: We’re back. Nathan Lyon to resume. On strike is Rishabh Pant

6:27 am: Cheteshwar Pujara has now faced 300 deliveries during his marathon innings or in other words has batted 50 overs himself. #MarathonMan

6:15 am: Appeal for a caught behind from Tim Paine. Nathan Lyon isn’t interested but Paine takes the review. Nothing on Hot Spot and Snicko doesn’t pick up anything either. Not out decision stays. Rishabh Pant unbeaten on 8.

6:01 am: Cheteshwar Pujara goes past 153 and is batting on 155 now which is his highest score in overseas Tests. His previous best in away Tests was 153 – in Johannesburg and Galle.

5:56 am: OUT! And Nathan Lyon gets the much-awaited breakthrough for Australia. Vihari goes for the sweep only to be caught by Marnus Labuschagne at forward short leg. Given out. He reviews. Snicko picks up something when the ball crossed the bat. The ball lobs to FSL after lobbing off his biceps. On-field decision is upheld. Vihari added just three runs in almost an hour today to depart for 42. India 329/5

5:52 am: Cheteshwar Pujara comes down the track and expertly drives Nathan Lyon through covers for his 18th four which takes him to 151 runs. Pujara continues to bat well.

5:49 am: Double change from Paine – Mitchell Starc into the attack as well. Bowls short and Pujara pounces on it with a cut over point for the first four of the morning. Five runs from the over. India 324/4

5:34 am: India don’t seem to be in a hurry today. They are happy to play out dot balls as two more maiden overs tell us. The brief seems to be: take your time, tire them out and when you can, score. Unless Australia find ways to dislodge these two, they should be prepared for another day of toil. India 315/4

5:22 am: So after two straight maiden overs, some runs for Pujara and Vihari off Hazlewood – two gorgeous drives from the India duo. Six from the over take India to 314/4

5:08 am: Hazlewood and Pat Cummins start the day for Australia as they search for early wickets. Pujara looks to be quite comfortable as a drive through covers for a triple off Hazlewood showed. Mitchell Starc hasn’t be summoned early with Tim Paine placing his hopes on Cummins. Five runs from the first two overs. India 308/4

5:00 am: Josh Hazlewood to start the proceedings. On strike is Cheteshwar Pujara

No Richie Benaud in the commentary box but no shortage of Richies in the stands at the @SCG #AUSvIND pic.twitter.com/RHubT0Drli

It’s going to be an interesting day

Day 2 at SCG… spotted a bunch of Richies! #AusvInd pic.twitter.com/DOVwH9OKOS

Hello and welcome to LIVE coverage from Day 2 of the fourth and final Test between India and Australia from the Sydney Cricket Ground.

India dominated the opening day with Cheteshwar Pujara, who brought up his third century of the series, writing his name on all three sessions. Coming in to bat after KL Rahul s torrid form with the bat continued, Pujara, as usual, took his time to settle down, but once he got used to the pace and bounce of the wicket, he upped the scoring rate. After the dismissal of Virat Kohli, Hanuma Vihari (39 not out) and Pujara steadied the ship with the duo unbeaten on a 75-run partnership for the fifth wicket when stumps were drawn.

India will want the duo to capitalise on their strong start and lay the foundation for a huge first innings total.

Kaushik: Not quite the fairytale KL Rahul would have hoped for

Narula: Pujara bats and bats, and then bats some more, to give India advantage 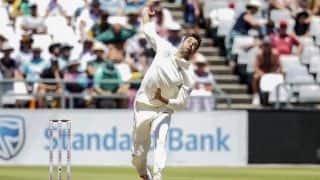