Coming to bat at in the second over the day after KL Rahul s yet another failure, Pujara took his time to settle down at the crease, but once he got used to the pace and bounce of the wicket, he upped the scoring rate.

Cheteshwar Pujara proved to be the rock of the India s innings yet again, bringing up his third century of the series to help the tourists dominate the opening day of the fourth and final Test against Australia at the SCG on Thursday.

Coming to bat at in the second over the day after KL Rahul s yet another failure, Pujara took his time to settle down at the crease, but once he got used to the pace and bounce of the wicket, he upped the scoring rate.

ALSO READ: The best and worst from Day 1 of Sydney Test

It was a typical Pujara like innings he brought up his 18th Test hundred off 199 deliveries and went past the 438 runs against England in the 2012-13 as the most he had scored in a Test series. He was unbeaten on 130 off 250 balls with Hanuma Vihari giving him company on 39 off 58 when stumps were drawn.

Pujara s innings drew huge praise from the cricket fraternity, who took to Twitter to congratulate the Saurashtra batsmen. Here are a few

Yet another Test Match, yet another marvellous innings from Pujara. Many congratulations on the 18th Test hundred. Has been a delight to watch you bat, @cheteshwar1 ! pic.twitter.com/dxTiaidSYc

Very happy for Pujara. Here is a player who knows his game inside out, is comfortable with who he is and how he plays and is just a simple, modest man. And that quality is a big part of his cricket.

Calmness while batting, calmness in celebration. Pujara stands out in today s frenetic world as he has done in this series.#AusvIndia

Zindagi na milegi Pujara. Brilliant to watch the determination and the consistency has been amazing.

Congratulations @cheteshwar1 on your third hundred of the series.

He is still batting! #AusvInd

It was Cheteshwar Pujara’s day out at the @scg!

The No.3 batsman’s unbeaten and Mayank Agarwal’s 77 take India to 303/4 at stumps on the opening day of the final Test. #AUSvIND SCORECARD https://t.co/c2fCH8UcMc pic.twitter.com/l57frDoU6v

He has been brilliant @cheteshwar1 well played but just keep going. A daddy hundred and the Test match will be India s.

Heartiest Congratulations @cheteshwar1 3 hundreds and just the way he has batted on this tour.. Standout

3 hundreds in the series, more than 400 runs, most of these made in masterly fashion. @cheteshwar1 has not merely blunted the Aussie attack, he s nade it wilt. In many ways, he s been the difference between the two sides. Epic performance!

The RESPECT you get as a cricketer for what @cheteshwar1 is doing in TEST CRICKET, is GREATER than any wonderfully skilful T20 innings. 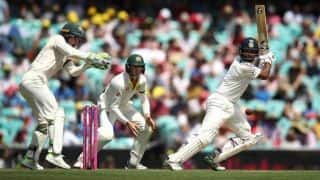