Paine then tried to goad Pant into a big shot off Nathan Lyon and he almost obliged, but his attempted big shot falls well short of the fielder though.

Australia captain Tim Paine is at it again. After his brush with counterpart Virat Kohli became the talking point, Paine is far from done as far as instigating the Indian batsmen with light banter goes by.

After having a go at Rohit Sharma on Day 2 of the third Test at the Melbourne Cricket Ground (MCG), Paine decided to pick on young Rishabh Pant on the third day in the last session during India s second innings on Friday.

A video tweeted by Cricket Australia sees Paine murmur something about MS Dhoni being back in the ODI team. Now that Big MS back in the ODI squad, maybe he could play for the Hobart Hurricanes. Beautiful city, rent a nice waterfront place, Paine said.

Paine then tried to goad Pant into a big shot off Nathan Lyon and he almost obliged, but his attempted big shot falls well short of the fielder though.

The banter in the series began with Pant himself, who first tried to instigate Pat Cummins to go aerial in the opening Test at Adelaide.

Tim Paine doing some recruiting for the @HurricanesBBL out in the middle of the ‘G… #AUSvIND pic.twitter.com/6btRZA3KI7

At the MCG, Pant might have found himself at the crease earlier than usual after Cummins ran through the Indian top order to pick up four wickets to build pressure on India leaving the tourists at 54/5, 346 runs ahead.

This was after Jasprit Bumrah s masterful maiden six-wicket haul orchestrated Australia s downfall in the first innings. The hosts were bowled out for 151 and Kohli refused to enforce the follow-on a decision that might have regretted considering India are half their side down at the MCG. 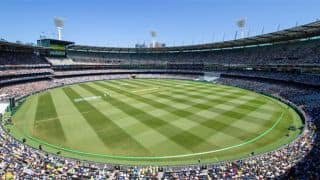