Perth: Indian captain Virat Kohli defended the decision to go for an all-pace attack after they slumped to a series-levelling defeat to Australia in the second Test in Perth on Tuesday.

The Indians were beaten by 146 runs as Australia made it 1-1 in the four-match series, with spinner Nathan Lyon playing a pivotal role with eight wickets.

India made the unusual decision to go with a pace quartet after spinner Ravichandran Ashwin was ruled out with an abdominal strain, recalling Umesh Yadav ahead of Ravindra Jadeja.

Indian paceman Mohammed Shami questioned the selection after the fourth day’s play and said that he believed a spinner would have been a better decision. But Kohli backed Yadav’s recall at the all-new Perth Stadium, saying the fast bowlers did as well as he expected.

ALSO READ: I feel there should have been a spinner: Mohammed Shami

“We as a team didn’t think we definitely wanted to consider a spinner on this pitch, especially looking at the pitch on day one and how we thought it would play the first three days, which is how it did play,” he said.

“We thought the fast bowlers were going to be more productive for us as a team. They executed their plans to 95 per cent of what we expected, and you can be happy with that.

“We were pretty convinced going in with four fast bowlers, looking at the conditions, and I think they did pretty well.”

Kohli said Umesh’s last Test saw him claim 10 wickets against the West Indies in October, while Jadeja had not played much red-ball cricket recently. But the complicating factor for India was that recalling Umesh for the injured Ashwin also weakened their batting line-up.

“Obviously Ashwin or Jadeja have more ability with the bat,” Kohli said.

“It is a very tricky decision to make, what bowling option do you go with or do you want that guy to contribute with the bat. We backed that decision and went with it, we were totally convinced it was our best combination and the batsmen have to take responsibility,” he said.

Ashwin is expected to be fit for the third Test, starting in Melbourne on December 26. Kohli also backed misfiring openers KL Rahul and Murali Vijay to regain form. 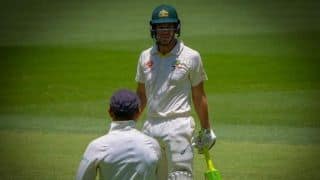