India, who had set a 191-run target, could not contain Maxwell as the Aaron Finch-led side handed Kohli his first series defeat at home as Indian captain. The series loss was also India s first T20I bilateral series defeat since 2015 when South Africa had beaten India 2-0 in the three-match T20I series. (ALSO READ: Glenn Maxwell joins Rohit Sharma, Colin Munro with three (or more) T20I hundreds)

Peter Handscomb accompanied Maxwell till the end, giving Maxwell the strike, and was involved in an unbeaten 99-run partnership. The two joined hands after Australia had lost D’Arcy Short and the match still in balance. Highlighting his approach during the partnership with Maxwell, Handscomb said, “Happy to see Maxi bat the way he did. That was the best seat in the house to watch that and it was a privilege from my end.”

“I’ve been working on that one (the shot over extra cover) so it’s nice to get done in the game and I was trying to get Maxi on strike and take the game as deep as possible,” added Handscomb. (SCORECARD: INDIA vs AUSTRALIA, 2nd T20I)

The wicketkeeper-batsman also said that the T20I series win will give the Australian side in the upcoming five-match ODI series against India.

This will give us a lot of confidence going into the ODIs and it’s something we spoke about in the team meetings and we wanted to make sure we got in-batters at the end as it was batters job to do, said Handscomb.

Maxwell, who had scored a fifty in Australia s thrilling last-ball win in Vizag, was once again at the forefront in Australia s win in Bengaluru. Handscomb lauded the Big Show after his third Twenty20 international hundred powered Australia to a series win. (READ: Virat Kohli levels with Shoaib Malik at third spot in all-time T20I run list)

“Maxi stood up today and that can give the whole batting group a lot of confidence going forward. He (Maxi) is a freak. he can play all those shots that other people can’t play and he’s just maturing with each game,” concluded Handscomb.

Put in to bat, KL Rahul, who had scored a fifty in the first game, once again chipped in with some quick runs (47 off 28 balls) while MS Dhoni scored 40 off 23 balls. 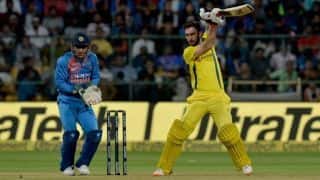 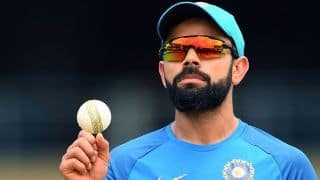