In the three-match ODI series against India earlier this year, the right-arm quick impressed with his accuracy and movement, taking six wickets including a man-winning 4/26 in the 1st ODI at Sydney.

After his impressive performances against India and Sri Lanka at home, young Australian pacer Jhye Richardson hopes to continue his good form when he travels to India for limited-overs series, staking a claim for a spot in Australia s World Cup and Ashes squads. (ALSO READ: Is this India s final World Cup squad?)

With injuries to Mitchell Starc and Josh Hazlewood, Richardson came hope for some good playing time in the two T20Is and five ODIs against India, but he will have to stave off stiff competition from the likes of recalled Kane Richardson, Nathan Coulter-Nile and upcoming Jason Behrendorff for the fourth seamer s slot for the World Cup. (ALSO READ: India series a great chance to prove my worth: Jason Behrendorff)

Richardson, though, has a unique way to staying focused.- by writing messages on his shoes and in India he said the message will be to keep it simple. (ALSO READ: Glenn Maxwell at peace with pretty valid ODI batting demotion)

“It will probably be something that sticks around – just to keep things simple and stay in the contest as much as I can,” the 22-year-old told AAP as reported by cricket.com.au.

In the two Tests against Sri Lanka at home, Richardson had wrote rote ‘KISS’ (keep it simple stupid), and ‘Ruthless’ in his shoes and it pay dividends as he claimed 3/26 and 2/19 in the 1st Test and 1/29 in the second.

In the three-match ODI series against India earlier this year, the right-arm quick impressed with his accuracy and movement, taking six wickets including a man-winning 4/26 in the 1st ODI at Sydney. 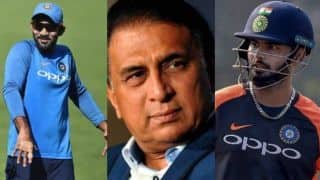