Ashwin said India will give a tough fight to Australia and for that, the team will have to be at their best each day of the tour

Ravichandran Ashwin refused to acknowledge that India start as favourites against Australia in the four-match Test series starting at Adelaide on December 6, stating that the whole talk revolving around India being the stronger outfit seems like Australia s strategy.

“The whole talk about India starting favourites, even when Australia came to India they were talking us up, and it looks like more of a strategy for us, Ashwin told reporters at the end of day two of the tour game at Sydney.

While Australia cricket is still reeling from the effects of the sandpaper scandal that saw star players Steve Smith and David Warner cop bans and the with damning longstaff report questioning the cricket culture in Australia, the focus for the visitors ahead of the marquee series has not solely remained on the series.

Former cricketers have taken a jibe at the new approach to the game of the Australian team under the leadership of Time Paine and with a batting line-up sans Warner, Smith and Cameron Bancroft coupled with a very strong Indian fast bowling unit, many believe that this is India s best chance to win a Test series Down Under against a depleted Australian unit.

But Ashwin reminded that at home, Australia will always remain the favourites as was evident from their dominating performance in the Ashes earlier this year.

“In the Ashes they almost whitewashed England, knocked them over, and so as far as I’m concerned they are starting favourites, he said.

The Tamil Nadu bowler did however say that India will give a tough fight to Australia and for that, the team will have to be at their best each day of the tour.

It’s very important for us to chip away every single day, every single ball, and if we can get our noses ahead, stay ahead, added Ashwin. 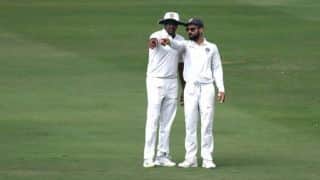