India vs England, 1st Test: England are not good enough to win every game: Michael Vaughan
By Press Trust of India

Be angry and challenge Virat Kohli, urged former captain Michael Vaughan to an English side hosting an ambitious India, for long seeking to shed the poor travellers’ tag, in a highly-anticipated Test series.

Besides, the 43-year-old who opened for his country for almost a decade, wants the seasoned Alastair Cook to show consistency and skipper Joe Root to convert his starts into monumental knocks. Cook has played alongside the player-turned-expert in the beginning of his career.

He prefers a five-man bowling attack and last but not the least, Vaughan goaded the pace duo of Stuart Broad and James Anderson to “step up and challenge Virat Kohli’s front foot”.

“Joe Root needs to hammer home to his men that they have a point to prove and try to replicate that angry England team that arrived at Headingley and hammered Pakistan in their last Test. Go back and say to the players: ‘What were you thinking that first day at Headingley?,” Vaughan wrote in the ‘Daily Telegraph’.

“Sometimes it is not done in team chats. Sometimes you are better off speaking to individuals. Go to each individual and ask: ‘Why did you arrive in Leeds with more intensity’?”

England crushed Pakistan by an innings and 55 runs in the Headingley Test in June.

“This England team has to find that attitude without first having to be stirred into a response through criticism after a hammering. Maybe the Adil Rashid furore will help,” said Vaughan, who was one of the key characters involved in the Rashid “furore”.

READ: When it comes to Yo-Yo Test, 33-year-old Alastair Cook is an absolute machine

“England will not win every game, they are not good enough, but their mindset and mentality can be the same every week.”

The five-match series starts in Birmingham on Wednesday.

Regarding the prolific Root, he said, “He averages over 50 from 16 Tests as captain. I would have snatched your hand off for that average. The only problem for Joe is that he has not scored the hundreds he should have done.

“He has found his form in the one-day game and got out of his system the frustration and anger, and trying to bat like someone else rather than trusting his own game. All he needs is to be himself.”

He thought the way to go is to wear the Indian bowlers down.

“This is the perfect series. The pitches will be good, he is a great player of spin and you can wear India’s seamers down because I don’t think they will be that disciplined. Outfields will be rapid. Everything is set up for Joe to have a great series.”

As for Cook, Vaughan expects consistency from the most experienced player in the current set-up.

“Alastair Cook needs to find consistency. One massive score in a series along with loads of low scores is no good. He needs consistency over the next five games. And he has to drag Keaton Jennings with him.

“Yes, Cook has to look after his own performance, but it would be nice to take Jennings with him so whenever he leaves the Test team he has made sure England have a decent, half-experienced opening batsman to take on his mantle.”

“He scored a hundred on debut in Mumbai and it is always nice to know you are playing against a team you have had success against before. That could be worth a lot for him.”

The ex-captain spoke about his preferred combination to take on Kohli and Co. over the next month and a half.

“If England go with six bowlers it is too many. Six covers too many bases. You are almost not trusting your bowlers to be good enough. Personally, I would pack the batting and pick the best five bowlers, with Root the sixth as a part-timer.

“England’s problems have been not getting enough big scores on the board and this Test team has to work out how they are going to make 400-550 on a regular basis, not just in one-off games.

“If it is four seamers and one spinner, fine, or three and two because of conditions then also fine, but do not be any more funky than that. With the heat and how dry it has been I suspect they will go with two spinners.

He also expressed his views about the much-anticipated clash between Kohli and the pair of Anderson and Broad.

“I was critical of them before Headingley. They were outstanding in that game and they will have to be outstanding again.

“It is always hard when you have had a long break from Test cricket to get that vibe again. The good thing for England is they are playing at Edgbaston. We just don’t lose there and Stuart Broad and James Anderson love bowling at the ground,” he said.

“You expect Broad and Anderson to step up and challenge Kohli’s front foot. Bowl outside off-stump and then throw the odd one in straight to get him playing across the line and scissor his feet,” he added.

Speaking about the Indian run-machine’s batting, he observed, “You need his front left-foot going over to the off side, he then starts doubting where his off-stump is and playing squarer on the off side which is when the outside edge comes into play.

“England did it in the one-day series at times. He was vulnerable a yard outside off-stump and the likes of Anderson and Broad have to hang it out there and say ‘Come to us’. If there is any movement in the air they will be a real threat.” 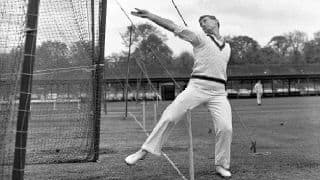