Overnight rain had dampened conditions at Lord s, and as a light but steady drizzle continued through the day the chances of play starting on time quickly receded.

Day one of the second Test between India and England at Lord s looks likely to be a complete damp squib with persistent rainfall resulting in the first session being washed out and an early lunch taken.

Overnight rain had dampened conditions at Lord s, and as a light but steady drizzle continued through the day the chances of play starting on time quickly receded. Under granite skies, the match umpires decided Marais Erasmus and Chris Gaffaney inspected conditions and decided that the toss could not proceed, and two hours later it was announced that the first session had been washed out and that an early lunch would be taken.

Will the entire opening day s play be washed out? As we await further developments, here is a look at some notable Test match opening days in England when not a single ball was bowled.

The second Test of the 1964 Ashes began on a very wet note, with the first and second days completely washed out. When play eventually began on day three, Australia were bowled out for 176 with Fred Trueman taking 5/48, and at stumps England were 26/1. Following a rest day, England made 246 before Australia closed out an inevitable draw with 168/4 in their second innings.

The opening day of the fourth Test in Durham was washed out without a ball bowled, which dampened England s chances of winning the series 3-0 (they did, eventually, by seven wickets). At 12:30 local time the match officials decided to call of play.

Day one of the third Test at Edgbaston had to be abandoned without a ball bowled because of heat rain, with the umpires Kumar Dharmasena and Tony Hill deciding at 15:35 local time that no play would be possible. This marked the first full Test match day to be washed out in England since the 2009 Ashes Test also at Edgbaston.

The first day at Headingley saw no play on account of rain across Leeds. This was the second and final Test of the series in 2013, as England prepared to host Australia for the Ashes. Intermittent rain on the opening morning delayed the toss into the second day, at which time Alastair Cook opted to bat. England ended the second day on 337/7 and made 354, after which New Zealand were rolled over for 174. England won the Test by 247 runs and the series 2-0. 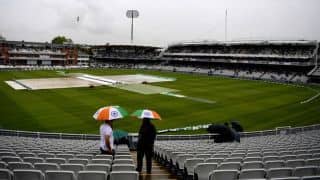