Murali Vijay, Cheteshwar Pujara put hosts in a commanding position at lunch during Day 1 of the first India vs New Zealand Test.

It is a historic day at Green Park, Kanpur. It is India’s 500th Test. And captain Virat Kohli is yet again in the thick of things. The first match of three-Test series is underway. India and New Zealand looked all set to get the better of each other in the first session of Day 1. All the same, India won the toss and chose to bat first that had a tinge of grass on it, with dark clouds looming over the stadium, a perfect opportunity for New Zealand to bog India down with ferocious swing bowling. Nonetheless, Indian batsmen applied themselves sensibly, scoring 105 for 1 at lunch.

Kohli not only takes everyone aback with his stellar batsmanship but also surprises us with the kind the team composition he dishes out in every match. He engineered a six-batsman strategy, with a spin and pace duo each. More importantly, he dared to drop the Gabbar of Indian cricket — Shikhar Dhawan — from the playing XI. As a matter of fact, he was dropped in the final Test of the Caribbean tour as well. Given KL Rahul has been in an ominous form, he deserves a spot in any format India plays. On the other hand, Murali Vijay and Cheteshwar Pujara, who where in and out of the previous tour, have retained their spots.

However, playing the speedster Umesh Yadav in place of Bhuvneshwar Kumar left everyone thinking as to why the in-form bowler was made to warm the bench. To remind, Bhuvneshwar took a stunning five-for in the third Test against West Indies.

The crowd growled as the Rahul-Vijay duo entered the ground. As players took the field, the groundsmen looked all in readiness with the covers just for the sake of precaution. Amidst all this, New Zealand pace duo of Trent Boult and Neil Wagner were curious to exploit the humidity, making the ball swing into the right-handers.

“Play,” said the umpire. Boult to Rahul. The ball jabbed back but went down leg. There was a wry smile on Boult’s face. He knew the track had something to offer for him. He ran in hard the next ball and gifted Rahul a juicy, in-swinging full-toss. Well, would the man in form miss out on such opportunity? Of course, not! Rahul leaned forward and fluently timed it down the ground. And then, there was another delightful stroke oozing out of Rahul’s bat: he punched an over-pitched delivery through covers. Also read: 10 things that makes Kohli and Williamson similar and the very best

Wagner started off well from the other end, keeping Indian batsmen on the back foot. After 2 overs, India were 12 for 0.

As the youngsters battled hard in the middle, former India Test captains such Sachin Tendulkar, MS Dhoni, Sourav Ganguly laid back in the VIP box and enjoyed the game’s most prestigious format.

Boult made an excellent comeback in his second over, outfoxing Rahul with an absolute ripper. Truth be told, had Rahul not got the inside edge, he would have been gone for all money. Nonetheless, it looked like an easy-paced wicket, something the New Zealand batsmen must be itching to bat on. FULL CRICKET UPDATES: India Vs New Zealand, 1st Test 2016, Day 1

Amidst all the excitement of the 500th Test, Rahul continued his continued form, playing a delicious stroke after stroke. However, it was alarming for New Zealand captain Kane Williamson, for it was imperative that they bag a wicket. And thus, he made the first bowling change, introducing slow left-arm orthodox Mitchell Santner in the 9th over. He bowled in the area of uncertainty, trying to zip it away from the batsmen. But Indian batsmen used their feet and dealt in ones and twos instead, making sure they keep the scoreboard ticking.

Williamson kept Santner into the attack, expecting a wicket. On the other hand, Rahul had belligerence on his mind. He swept a tossed-up delivery soaring over the deep mid-wicket boundary. Rahul’s intention was clear: unsettle the opener and dictate terms.

It’s a Test match, and Santner knew he need not press the panic button. He kept doing what was asked of him. The plan worked, as Rahul rocked back to a length ball and edged it to the keeper. It seemed as if aggression got the better of the star batsman. On another day, he would have watched the ball closely, leaned forward and stroked it through covers. He went back instead, eventually getting dismissed. Also read: Tendulkar: See this batch representing India for next 10 years

The talks of who would bat at No. 3 engaged everyone, as Rahul walked back to the dressing room. Would it be Virat Kohli or regular No. 3 batsman Cheteshwar Pujara? To remind you, Kohli had come one-down in the third Test against West Indies. Or worse-case scenario, would the captain send the erratic Rohit Sharma instead?

However, the team management decided to stick to basics. They sent Pujara to see off the new ball.

Given Santner was creating trouble, Williamson brought off-spinner Mark Craig from the other end. The strategy was right on the money, as Pujara is often seen outplayed by off-spinners. Armed with a loose bottom-handed technique and low back-lift, Pujara produces a slight gap between the bat and pad.

Be that as it may, India came with a mindset of piling on runs. Pujara, especially, used his feet against the spinners and pierced gaps. Not that the New Zealand spinners did not spit any venom, it was Pujara’s class-apart technique that kept the spectators on their feet. Also read: Gambhir, Sehwag and others tweet on India’s 500th Test

Vijay, at the other end, was quietly picking boundaries. He was at his ‘monk’ best, taking minimum risk.

20 minutes to Lunch break, and Williamson introduced leg-spinner Ish Sodhi. He bowled a flatter trajectory, not letting Pujara use his feet. Nonetheless, as soon as he tossed it up, Pujara pounced on it and spanked it down the ground.

Along with Vijaya, Pujara added 63 runs for the second wicket. With two more sessions to go, it is likely to be a batsman-dominated day. There was a hint of swing when the ball was new. There was even some serious turn at times. But there was nothing troublesome to the batters, as they found their feet with ease and grace. 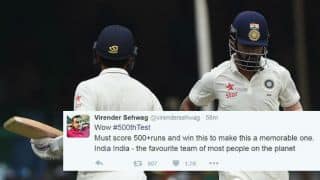