Virat Kohli's decision to bat first in Bengaluru T20I went against the norm – no team winning the toss at the M Chinnaswamy Stadium has ever opted to bat first.

Virat Kohli‘s decision to bat first in Bengaluru T20I went against the norm – no team winning the toss at the M Chinnaswamy Stadium has ever opted to bat first.

The surprising decision raised eyebrows but Kohli has his plans clear – eliminating the toss out of the equation. His idea is to push his teammates out of their comfort zone and instil in them a fearless attitude leading up the next year’s T20 World Cup in Australia.

READ: Rohit equals Dhoni’s record for most T20Is for India

The decision came under much scrutiny after South Africa coasted to a nine-wicket win and thus denying India what would have been a series clinching victory on Sunday.

But Kohli feels that such scenarios are inevitable if they want to build a team capable of winning the world cup. “Look, we will have to take risks,” Kohli said at the post-match press conference. “Even when you want to win a game of cricket you have to take risks, so nothing is a given, nothing is a guarantee before you start playing. I think as a team if we are willing to get out of our comfort zone a lot more, then we will be unfazed with what happens at the toss. That’s our basis idea: trying to take the toss out of the equation as a side.”

He added, “That’s why we are trying to play the best combination we can, (with) people batting till nine. So that if you bat first or bowl first, you know we are in a good position.”

Kohli wants his players to test themselves in different scenarios in order to avoid getting accustomed to one way of doing things. “Mentally, if we put ourselves in a situation where we are ready to do anything rather than wanting to do one thing, we will be in a better position as a side to capitalise on any situation that we are in.”

This, the 30-year-old said, will help them identify where they lack and thus address the problematic areas. “Unless you do that, unless you start taking those risks, you are always going to be put under somewhere or the other. We want to make sure that we iron all those out before we head into the World Cup.”

India posted a middling 134/9 but the tourists overhauled the target without dropping a sweat, thanks largely to their captain and opening batsman Quinton de Kock who scored an unbeaten half-century.

Kohli did admit the total was low and it will be harsh to judge the performances of their bowlers as there weren’t enough runs to defend.

“Bowlers coming out of their comfort zone mean at least they get 160 (to defend). You can’t defend 130, we didn’t get it right with the bat and you can’t be too harsh on the bowlers in a T20 game with this kind of total when there is a bit of dew as well. They should not be analysed or criticised on defending this low total. We didn’t have enough runs on the board, so the bowlers are always under pressure knowing that one or two overs can take the game away from you,” he said. 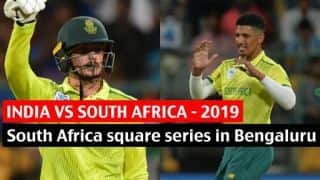