India are coming off a series win in England and would want to keep the momentum.

India’s last home series before the ICC World Cup 2015 begins at the Nehru Stadium, Kochi as they take on the West Indies in the first One-Day International (ODI). It is the second time in 12 months that Kochi will host the West Indies, as they played the first ODI of the 2013 series at this venue. Back then, India had triumphed quite easily, giving West Indies no chance. Things are different this time as West Indies seem stronger and India are trying to build a side leading up to the big event. See India’s likely XI here

The news from Kochi is that there is a threat of rain on Wednesday. The cricket mad public in the city would hope that it stays away. In 2010, an ODI between India and Australia had been washed out without a ball being bowled. The Kochi Tuskers Kerala played only a few games there and after a long time, they had the West Indies game last year. Having an ODI in quick succession is new to Kochi and they would pray the gods relent and allow a full game.

India are coming off a series win in England and would want to keep the momentum. Ravichandran Ashwin, their ace spinner has been rested, with Kuldeep Yadav coming in his place. Remember, Kuldeep is yet to play a List A game and if he is preferred to Amit Mishra, he would make his List A debut in an ODI. Then there is Rohit Sharma, who hasn’t recovered from injury and Murali Vijay has come in his place as a reserve opener.

Despite those changes, India’s XI is almost predictable. Shikhar Dhawan will open the batting with Ajinkya Rahane. Virat Kohli, Ambati Rayudu, Suresh Raina and MS Dhoni will form the middle order. Ravindra Jadeja would bat at No 7 and would be the fifth bowling option. With Ashwin out, Mishra should make it into the side as he has been on the fringes for some time. India have four fast-bowling options. Mohit Sharma, Bhuvneshwar Kumar, Mohammed Shami and Umesh Yadav would compete for three berths in the XI. Expect Bhuvneshwar and Shami to make it, with Mohit and Umesh fighting for the third spot.

On the West Indian side of things, they too are missing their opener. Chris Gayle is out due to injury and that leaves them with three men to take the two spots. The experiment with Kirk Edwards did not work in the series against Bangladesh and they’d get Lendl Simmons to start proceedings. Simmons has been in prime form in T20 cricket this year and West Indies would do well to get him at the top. Leon Johnson is the new face in the side and he has a shot at playing his fourth ODI. Dwayne Smith too is a possible contender for the opening spot given his exploits in T20 cricket. Jermaine Blackwood is with the side and he featured in the second practice game, but it is unlikely he would play. Read the key battles of the India vs West Indies 1st ODI here

The batting line-up would consist of Darren Bravo, Dwayne Bravo, Marlon Samuels, Kieron Pollard and Denesh Ramdin. Picking the bowling is a bit tricky now they don’t have the services of Sunil Narine and it is unclear of Suleiman Benn would reach in time for the game. So they may be forced to play four frontline fast-bowlers. Darren Sammy and Andre Russell may find it tough to break in as they already have Pollard and Bravo as all-rounders. So, they could well go for Jason Holder, Ravi Rampaul, Kemar Roach and Jerome Taylor. If the team selections is one worry, the players are also threatening to go on strike which could put the whole series in doubt. The players are upset over payment issues and skipped the pre-match press-briefing and practice session.

One may pick India as the favourites for this game, but if the West Indies find their own, they would be a tough side to beat. And, they too have the necessary experience of these conditions as they regularly feature in the Indian Premier League (IPL). The playing area at Kochi is small and there are big hitters on both sides. One can expect some serious entertainment. 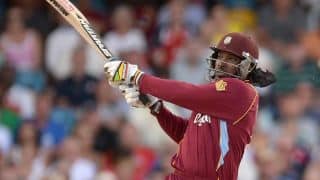 India vs West Indies 2014: Would Chris Gayle have had a huge impact in the series?