Follow all the live updates from the India vs West Indies 2018, 2nd T20I in Lucknow.

Will Lucknow be lucky for India? On that note, as cliche as it sounded, international cricket returns to Lucknow, the city of Nawabs, after 24 years. India last played Sri Lanka in a Test in January 1994 when Navjot Singh Sidhu’s 124 guided the hosts to a crushing innings and 119-run win over the Islanders.

Good evening, everyone and welcome to CricketCountry’s coverage of the second Twenty20 International between India and West Indies to be played at the newly-built Ekana Stadium on Tuesday. In case you missed it, the Ekana Stadium has now been renamed to Atal Bihari Vajpayee Stadium in honour of the later Prime Minister of India.

After a low-scoring first T20I at the Eden Gardens in Kolkata which the hosts just about managed to scrap through with a five-wicket win, courtesy Dinesh Karthik and debutant Krunal Pandya, India will want to drill the final nail in the coffin against the hosts, who have had a disastrous tour this year, losing the Test series 2-0 and then the five-match ODI series 3-1. Here’s the full preview. 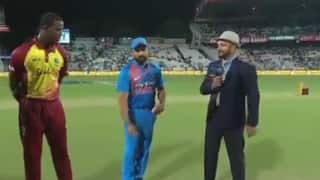