Virat Kohli is on a record-breaking spree in the second one-day international against West Indies at Port of Spain in Trinidad. The Indian captain, who registered his 42nd century, went past former India skipper Sourav Ganguly, to become the eighth highest ODI run-getter and India’s second highest run-scorer in ODIs.

Virat kohli another master class in one day cricket @imVkohli @BCCI .. what a player

In 311 ODI matches, Ganguly had scored 11,363 runs, which Kohli left behind in his 238th ODI appearance. “Virat kohli another master class in one day cricket @imVkohli @BCCI .. what a player,” Ganguly wrote on Twitter soon after Kohli broke his record.

When Kohli reach the three-figure mark, India were 191/3 in 37.1 overs after opting to bat. Kohli’s century off 112 balls was studded with 10 boundaries and a six. He is now seven centuries short of Sachin Tendulkar‘s record of 49 ODI hundreds.

Earlier, Kohli, who was just 19 runs shy from overtaking Pakistan great Javed Miandad as the highest run-scorer against West Indies in ODI cricket, went past his 26-year-old record as early as the fifth over bowled by Sheldon Cottrell, who struck early to remove Shikhar Dhawan for just 2. Miandad played his last ODI against West Indies in 1993. 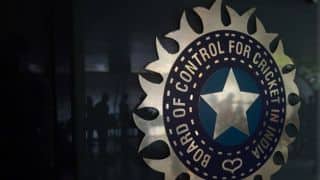 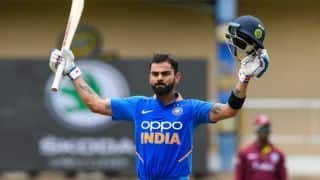