He was earlier reported in 2017 during a Test against England at Edgbaston. However, he was cleared after "an independent assessment".

Brathwaite, who opened the batting for West Indies during the two-match Test series against the Virat Kohli-led Indian side, bowls off-spin. This is the second time when the West Indian has been reported for his suspect bowling action.

He was earlier reported in 2017 during a Test against England at Edgbaston. However, he was cleared after “an independent assessment”.

“West Indies player Kraigg Brathwaite has been reported for a suspected illegal bowling action during the second Test against India in Kingston that ended on Monday,” said ICC in a media release on Sunday.

“The Match Officials’ Report, which was handed over to the West Indies management, cited concerns about the legality of the 26-year-old’s bowling action during the course of the match,” added ICC.

India, who has registered their biggest Test win in terms of a margin of runs in the first Test of the series, beat West Indies by 257 runs in the second Test to begin their World Test Championship campaign with a 2-0 series win in Caribbean.

“Brathwaite, who bowls off-spin, had earlier been reported for a suspect bowling action in August 2017 but was cleared following an independent assessment,” ICC said.

“With Brathwaite being reported again, he will be required to submit to further testing by 14 September. He is, however, permitted to continue bowling in international cricket until the results of the testing are known,” concluded ICC. 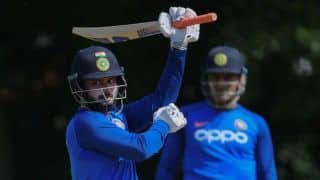 Sometimes I do think about comparisons with Dhoni: Rishabh Pant