The Indian cricket team on Tuesday steamrolled West Indies to wrap up the two-match series 2-0, thus tightening their grasp on the World Test Championship with a table-topping 120 points.

Resuming the fourth day on 45/2, West Indies were bowled out for 210 at Sabina Park in Kingston, Jamaica for India to complete a 257-run victory.

This win made Virat Kohli the most successful Indian Test captain of all time. This is Kohli’s 28th win in his 48th Test, which took him past MS Dhoni’s record of 27 Test wins in 60 matches.

CricketCountry ranks the 11 players who featured in the two Tests.

This was Bumrah’s series. Rested after the World Cup for the limited-overs leg of India’s tour of the Caribbean, a refreshed Bumrah gave West Indies’ batsman a torrid time. He hustled with pace, but smartly assessed the conditions both in Antigua and Jamaica and did not, in his own words, make the mistake of bowling too short.

Instead, Bumrah pitched the ball up in search of swing and the results were devastating.

During the first Test, Bumrah claimed the most economical five-wicket hail by an Indian bowler (5/7) to bowl India to a 318-run victory. On day two of the second Test at Sabina Park, his six wickets helped reduce West Indies to 87/7. Bumrah took the first four West Indies wickets to fall, and three of them came in a stunning hat-trick that was just the third for an Indian bowler after Harbhajan Singh in 2001 and Irfan Pathan in 2006.

Watching Bumrah run through West Indies batting, two Caribbean fast-bowling legends were prompted to wonder what he would have been like as part of that fabled West Indian quartet of the 1980s. It is a tremendous salute to arguably the best fast bowler in the game.

The biggest gain – or regain, you could say – of the series for India. Having gone 28 Test innings without a century, Rahane played two match-winning knocks during the first Test 81 and 102 to help India clinch a record 318-run win for an unassailable 1-0 lead in the series. Then at Sabina Park, he made 24 and 64 not out.

These scores are vital in getting Rahane back into a good space mentally, because from the start of 2018 until the start of the series he had managed just five half-centuries and was dismissed in the eighties twice. Seven times he was out between 10 and 20, and a further five times for 10 or less. Rahane corrected this during these two Tests, and looked like the batsman of old.

After ending his two-year century drought, Rahane termed his Antigua 102 as “really special” and “emotional”.

Full credit to the management for persisting with Vihari at No 6. After scoring a fifty on Test debut in England last year, batting in the middle order, Vihari was thrust into the opening role in Australia last December in only his third Test. In the next Test, he was back at No 6 and made 42.

After Rohit Sharma’s stellar World Cup run, there was reason to believe that he played at No 6 ahead of Vihari. But India’s think-tank backed Vihari and the 25-year-old responded with scores of 32, 93, 111 and 53 not out.

A maiden Test century was there for the taking in India’s second innings at Antigua, after Vihari had done so much of the spadework in getting the team to a huge lead in tandem with Rahane. But on 93, he swiped at a ball going down the pads and was taken behind the stumps.

He made up for it in his next innings, scoring 111 off 225 balls in another fine example of what Vihari brings to India’s middle order. He backed that up with a brisk unbeaten 53 before India declared with a lead of 467.

Dropped Jason Holder at backward square leg off Ishant Sharma at North Sound and put down John Campbell in the slips at Sabina Park.

Bumrah made headlines, while Ishant did what he has done very, very well for the past two seasons: run in, apply pressure and take wickets. He finished second to Bumrah in the wickets’ tally, and but for a couple dropped catches he could have been level on 13.

Ishant’s five-wicket haul in West Indies’ first innings in Antigua helped push India towards victory, and in the second he ably assisted Bumrah with three more. Added three in the Jamaica win, while repeatedly asking questions.

Bowled the most overs for any Indian fast bowler this series (51) and produced a couple corking deliveries with his strong wrist position. Shami also hit good pace, no doubt aided by having got a breather between the World Cup and the first Test.

With Bumrah taking wickets for fun, Shami was overshadowed but his good work underlined the value he brings to this Indian team. Never tiring, always attacking the stumps, Shami used mostly back-of-length deliveries to find the edges and force fatal shots. His patience in working out batsmen and setting them up was also noticeable.

Became the third-fastest Indian fast bowler to 150 wickets during the Jamaica victory.

Not a strong tour, personally, for Kohli the batsman. Failed in the first innings at Antigua and the second at Sabina Park, where he out first ball for the fourth time in Tests. Between those two failures, Kohli scored 51 to help India build their lead and then 76, an innings cut short by Jason Holder’s persistent channels. That second-innings 51 ended with a tame leading edge off Roston Chase’s offspin.

Kohli led well, and used the DRS smartly – no better than when he marched forward from the slips and signalled for the review that gave Bumrah his hat-trick.

The customary Kohli dropped catches in each Test were nothing new. At North Sound, Kohli fluffed a thick outside edge from Shimron Hetmyer off Bumrah which flew to his right at third slip. Trying to take the catch with reverse-cupped palms, Kohli dropped the catch and hit the ground in anger. During West Indies’ first innings at Sabina Park, Kohli made a mess of a regulation chance at third slip to deny Mohammed Shami the wicket of Hetmyer.

Preferred over R Ashwin for both Tests, Jadeja was not a source of big wickets but plugged away from one end. He bowled the most overs for India in the series (55.2) and barring one innings when he was hammered for 42 runs in four overs, Jadeja kept a lid on the run flow. Had a couple no-ball problems, which he needs to sort out.

Jadeja’s first-innings 58 in Antigua helped India from 189/6 to 297, and during the first innings in Jamaica he bedded down only to depart to a lapse of judgement against spin.

Agarwal looked the part of a Test opener in Australia and deservedly got a chance in Antigua and Jamaica. However, the aura of his debut series faded on this tour and he looked more susceptible to accurate pace and movement.

Four innings, two single-digit scores and one fifty. With Prithvi Shaw banned until November, Agarwal has done enough to retain his place for three Tests against South Africa at home in October, but will need to produce some strong scores to hold on.

The man continues to confound. Shaw’s absence meant that Rahul was retained in India’s Test squad, and after some ODI success during the World Cup in England there was reason to believe he had turned a corner. Perhaps. But instead Rahul flattered to deceive.

The opener fell to Chase both times during the Antigua Test, after getting starts. In India’s first innings, he got got to 44 from 97 balls and was dismissed when getting a thin edge on a glance down the pads. In their second, Rahul scored 38 off 85 balls before he was bowled to an all-advised sweep shot, in which he exposed all three stumps in an attempt to paddle the ball around the corner.

These two dismissals to Chase at North Sound mean that of his 58 innings in Test cricket, 20 have been between 10 and 49. Speaking to reporters at the end of day three, Rahul admitted he was bitterly frustrated at two aborted starts.

At Sabina Park, Rahul was dismissed for 13 and 6. Both times, caught behind when pushing at the new ball. These four dismissals in the West Indies mean that of his 60 innings in Test cricket, 21 have been between 10 and 49.

The first poor Test tour for Pant, whose haphazard manner of dismissals continue to add up. After becoming the first Indian wicketkeeper with Test centuries in England and Australia, Pant was a mess in the West Indies when batting.

Looked good for his 24 in the first innings at North Sound before he edged a drive to second slip early on day two, and later mistimed a booming sweep of Chase to deep backward square leg. True, India were searching for quick runs to bury West Indies, but the manner in which Pant fell was reminiscent of his dismissals during the World Cup and the limited-overs leg of India’s current tour.

At Sabina Park, he was bowled by a corker from Holder when driving expansively.

Pant’s wicketkeeping was overall tidy, barring the time he did not dive for that catch off Campbell at Sabina Park which Vihari put down.

A bad series for India’s usually reliable No 3. Statistically, this is Pujara’s second worst returns in a series in which he has played two Tests.

At North Sound, in the first innings Pujara was hurried into an indifferent push to Roach and edged to Shai Hope. In the second innings, Roach breached his defence with a delivery that moved in after pitching. That dismissal for 25 indicated that all is not well with Pujara.

Further proof of this fact came at Sabina Park, where Pujara became Rahkeem Cornwall’s maiden Test wicket when he cut a ball from the offspinner in the air to point. Pujara’s poor tour ended when Holder produced the edge in India’s second innings, which was pouched at third slip. 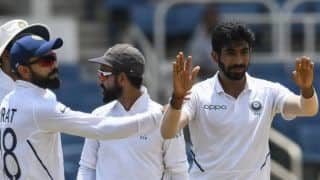 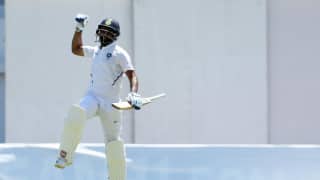