Punjab captain Ravichandran Ashwin was ecstatic with his side s emphatic eight-wicket victory over Mumbai in the Indian T20 League on Saturday but advised his side to keep their emotions in check.

We played a good game and used the momentum from the game against KKR, where we batted well. It s a marathon (IPL), so we have to keep our emotions in check, said Ashwin at the post-match presentation. (ALSO READ: Murugan Ashwin, KL Rahul star as Punjab beat Mumbai by eight wickets)

We gave a few runs too many in the end, there is a standard we want to set here and have to be hard on ourselves. Hopefully we can correct that as we move ahead, he added.

I thought they (Gayle and Rahul) paced their innings beautifully, we had our strategies planned for the first six overs against Mumbai and we executed that, he said, elaborating on the approach by the Punjab openers.

The Tamil Nadu offie lauded Mayank Agarwal, who scored a brisk 43 off just 21 balls. I hope he goes from strength to strength, he had a fabulous year and has been striking the ball really well. He has been touch unlucky when it comes to IPL but hopefully this is his year, said Ashwin. (ALSO READ: Chris Gayle first to 300 sixes)

It s a great feeling to get two points on board, hopefully this creates some sort of momentum as we go ahead. The year I have had has given me new confidence and I have a new outlook for this IPL. Just have to win games for my side, try to take it as long as possible and I am glad the plan came off today. 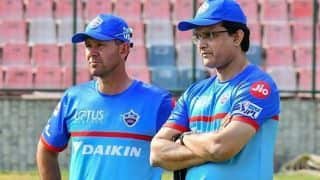