Upton said that his team are unperturbed by Ashwin s controversial dismissal of Jos Buttler.

In the 13th over of the Rajasthan run-chase, Ashwin mankaded the England wicketkeeper-batsman that triggered an intense verbal duel between the duo. Buttler s dismissal led to a royal collapse as the home side slumped from 148 for two to 164 for nine.

While the Englishman was the crease, Rajasthan were well and truly in control of the run-chase. However, after he fell for 69 off 43 which included 10 boundaries and two sixes, Rajasthan tumbled. (Ravichandran Ashwin an absolute disgrace)

“Jos Buttler was amazing while he was batting and for a lot of the game we batted like we wanted and really set ourselves up for victory,” Upton said at the post-match presentation ceremony.

“I thought the players were able to stay focussed and reset themselves after that run out. I was very happy with the players themselves, the way they acted and responded to that situation. And our conscious decision was to hold our heads up high and maintain our dignity as a team.” (ALSO READ: R Ashwin dupes Jos Buttler: Five times that ‘mankading’ made headlines)

Asked to comment on the Mankad dismissal, the South Africa explained: “I think R Ashwin’s actions tonight speak for him and represent him. When I looked in the eyes of his team-mates, I’m not sure it represented his team-mates. We’ll leave it up to the IPL fans to decide if that’s the kind of thing they want to see, and we’ll leave it up to the cricket world to judge R Ashwin’s actions tonight. But for us, we certainly are here just to play cricket and entertain the fans and just be good role models for people who love the game.

While Ashwin s acts was clearly within the laws of the game, many have been questioning if Buttler had actually left the crease when Ashwin stopped in his delivery stride. (ALSO READ: Michael Vaughan, Jofra Archer slam R Ashwin’s ‘mankad’ dismissal of Jos Buttler)

“I would still like to go and have a close look at the legality of it. But for us, the reality is Ashwin appealed and the umpire gave it out. That’s what we need to deal with. As I said, his actions represent him and speak for himself and it’s up to the fans and the cricket world to judge for themselves, Upton said.

And the legality is a separate issue, and probably a lot of teams are going to look more closely at that issue. I’d like to hope that the rest of the IPL continues in the spirit that we’re all here to come here and enjoy. 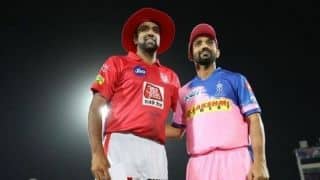