Former India World Cup-winning coach Gary Kirsten has been named as the head coach of Mzansi Super League franchise Durban Heat for the upcoming season of the T20 league. Regarded as one of the finest coaches, Kirsten will succeed Grant Morgan, who coached the franchise in the inaugural edition held in 2018. Durban Heat finished last on the points table with three wins and six defeats in nine matches.

With Kirsten taking a coaching gig in another T20 league, it puts an end to rumours of him being in the race to become the head coach of Indian cricket team. Kirsten is well-versed of the rule that an Indian coach cannot take up any other assignment until he is in the job.

In 2018, he was the first-choice of CAC to be the head coach of India s women s cricket team but his association with Royal Challengers Bangalore saw WV Raman, the second choice of CAC, take up the job.

Kirsten has a wide experience of coaching at international and franchise level. He landed the high-profile job of team India s head coach in 2008. Under his tutelage, India clinched the 2011 World Cup at Wankhede Stadium, Mumbai. After success with the Indian cricket team, Kirsten coached South Africa for two years.

Off late, he has been coaching franchises in various T20 leagues. In 2013, Kirsten was named the chief coach of Delhi Daredevils (now Delhi Capitals). After a poor run in two seasons, where the team failed to qualify for the playoffs, he was removed with a year still left on his contract

In 2017, Kirsten was appointed as head coach of Hobart Hurricanes in the Big Bash League. He left the position in 2018 citing personal reasons. Before IPL s 11th season, Kirsten joined Royal Challengers Bangalore as their batting consultant. Next year, he was elevated to the post of head coach after RCB parted ways with Daniel Vettori.

While the fixtures of Mzansi Super League are not out yet, more than 250 international players have registered for the tournament, Cricket South Africa announced on Wednesday. 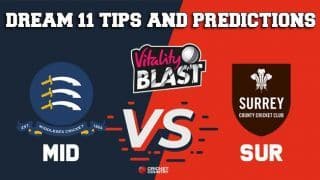