During his six-year tenure, Hesson guided New Zealand to new heights across formats.

Speculation over his chances as becoming the next coach of India and Pakistan has escalated after Mike Hesson tweeted Thursday that he had exited the Kings XI Punjab setup, less than a day after the Pakistan Cricket Board (PCB) sacked Mickey Arthur and his entire coaching staff.

Hesson, who coached New Zealand to the 2015 Cricket World Cup final, has been linked to the job of coach of the Indian cricket team.

The BCCI last month opened up applications for various roles inside the Indian team management, including head coach, bowling coach and batting coach. Current India coach Ravi Shastri’s contract ended after the World Cup but he and the support staff have been given a 45-day extension for the ongoing West Indies tour.

The BCCI is slated to review the applications from August 13. As per the BCCI’s new constitution, the post will be picked by the Cricket Advisory Committee, comprising World Cup winning captain Kapil Dev, former head coach Anshuman Gaekwad and ex-women’s team captain Shantha Rangaswamy, while the national selection panel will conduct the interviews of the support staff applicants.

Among those linked to the India head coach’s role are Tom Moody, Lalchand Rajput and Robin Singh.

The PCB on Wednesday removed Arthur and his support staff from their roles, a result of Pakistan failing to qualify for the semi-finals of the World Cup. Pakistan’s new coaching staff will be appointed after a four-member committee assesses the team’s performance at the World Cup, said the PCB.

Another possibility is that Hesson – described by Brendon McCullum as “the best coach the Blackcaps have ever had” – is in line for the role of South Africa‘s cricket team manager. Last week, Cricket South Africa (CSA) sacked Ottis Gibson and the entire coaching staff after the team finished seventh at the World Cup.

Until CSA can identify Gibson’s replacement, Corrie van Zyl has been named as acting Director of Cricket. Among van Zyl’s immediate tasks is to put together a coaching staff to take South Africa to India in September for three T20Is, followed by three Tests in October.

It was also announced that CSA will opt for a football-style management setup where there will be a team manager who will select his own coaching staff and captains in the three formats of the game.

Other teams who have removed coaches post the World Cup are Sri Lanka and Bangladesh. Trevor Bayliss will step down as coach of England after the Ashes to take over as coach of Sunrisers Hyderabad in the IPL.

During his six-year tenure with New Zealand, Hesson guided the team to new heights across all three formats. Under his tutelage, New Zealand played 53 Tests for 21 wins and 13 draws and won 65 of 119 one-day internationals and 30 of 59 T20s. 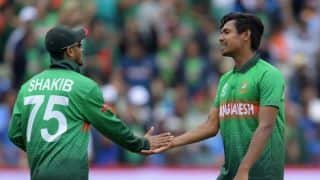