Milind Kumar, HS Sharath and Jayant Yadav have been sent back home.

The Delhi Daredevils (DD) have decided to temporarily trim their squad of 23 players to 20 with three of the domestic uncapped players, including local boy Milind Kumar, being sent home as there is no immediate requirement of their services. Apart from Milind, the other two players who have gone back home are Haryana off-spinner Jayant Yadav and young Karnataka medium pacer HS Sharath.

“Milind, Sharath and Jayant have gone home for the time being. If they are required they would be called back by the franchise,” an IPL source in know of things told the PTI.

“Sending back a few players in the middle of the tournament has been a common practice among the IPL franchise for the past few years,” the source added.

Normally it is done in order to bring down the number of players to a level where the support staff find it easier to manage during training session.

Although a possibility remains that they might just be summoned back but it will possibly only be at a time when Daredevils are officially out of the reckoning and give some of the younger players an opportunity to prove their mettle.

During their free-fall during their sixth edition of IPL in 2013, the Daredevils did give chances to players like CM Gautham, Bharat Chipli, Y Venugopal Rao for a few matches.

With Milind, the distant but only local connect that the franchise had, is not there anymore. For Jayant, it was also a tough road as he was the third specialist spinner after Shahbaz Nadeem and Rahul Sharma.

With JP Duminy being considered as more than capable off-break bowler, there was very little possibility of Jayant making it to the squad on the back of his bowling.

Similarly for HS Sharath, the lanky Karnataka lad is also way down the pecking order. With Jaydev Unadkat and Mohammed Shami being the two frontline Indian pacers, even Rahul Shukla of Jharkhand and Siddharth Kaul of Punjab are ahead of Sharath. Also, their presence along with Jimmy Neesham solves the problem of not having quality net bowlers.

Meanwhile, South African leg-spinner Imran Tahir‘s visa process is getting delayed and it is still not certain whether his services can even be sought for the match against Kolkata Knight Riders on Wednesday, May 7. Tahir has been talked about replacing injured pacer Nathan Coulter-Nile. 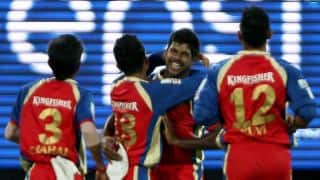