Catch live score and updates of the Delhi vs Punjab match here.

What. A. Ball. Akshar Patel bowled an absolutely Jaffa to blow KP away #MoovoftheMatch

Kevin Pietersen is so much taller than #KXIP he looks like the one kid in the U15s who has had a growth spurt.

Delhi 134/2, overs 16
D Karthik 61(38), JP Duminy 15(18)
Karthik has put his foot on the acceleration pedal for sure. A slog sweep goes for a boundary. He then follows it up with another fine shot down the ground for a six. Delhi think-tank would be a happy camp now. Fifty run partnership up as well.
Delhi 121/2, overs 15
D Karthik 50(35), JP Duminy 13(15)
Dinesh Karthik plays a beautifully timed shot down the ground a for a six. Now that shot was a symbol of excellence. He then follows it up another boundary off Dhawan. A fine fifty for Karthik off a mere 35 balls. They need about 180 runs on the board here.
Delhi 104/2, overs 14
D Karthik 39(32), JP Duminy 7(12)
JP Duminy is still taking his time to settle down and that is not good news for Delhi Daredevils.Punjab are definitely clawing their way back in to game especially with both spinners bowling with fine control for them.
Delhi 99/2, overs 13
D Karthik 37(30), D Karthik 4(8)
Karthik shows his class by essaying a fine boundary off Rishi Dhawan. They need a few boundaries here as their run rate has slowed down. Maybe it is time for Karthik to go for jugular and try a few risky shots. Punjab have batsmen in excellent form and you have to remember that.
Delhi 92/2, overs 12
D Karthik 32(26), JP Duminy 2(6)
It is up to Karthik to take over from Pietersen and up the ante. JP Duminy will take time to settle down before he can showcase his glorious artwork of placement and timing. A fine over from Shivam to follow up Akshar’s wicket-taking over.
Delhi 84/3, overs 11
JP Duminy 0(3), D Karthik 26(23)
Well it is again a SLA who has dismissed KP. Now that was a fine ball though from Patel as it gripped and turned to take out his off-stump. JP Duminy has come into bat at No 4 position. A maiden wicket over from Akshar Patel. Well done!
OUT! K Pietersen b A Patel 49(32)
Delhi 84/1,10 overs
K Pietersen 49(29), D Karthik 26(23)
It is Shivam who bowls for Punjab. KP uses the depth of the crease to collect two runs. He is looking a bit more confident against SLA. Have I talked too soon? A fine over though from Shivam as only six runs came from the 10th over of the game.
Delhi 78/1, overs 9
K Pietersen 46(27), D Karthik 23(19)
Karthik shows his class with a fine forceful shot on the back foot for  a boundary. The strategic time out surely didn’t affect his concentration prowess. KP then shows a bit of deft touch to take a single. A decent over that though by Rishi Dhawan.
Delhi 71/1, overs 8
K Pietersen 45(26), D Karthik 17(14)
Akshar continues to bowl. He is bowling decent lines and lengths here. They need to contain KP and tempt him to try a shot in frustration. The deck is flat though and Delhi batsmen need to post a very good score on the board.
Delhi 66/1, overs 7
K Pietersen 42(24), D Karthik 15(10)
It is Rishi Dhawan, the medium pacer who is bowling now. Karthik looks to use his feet to him but can only get a single. Kp continues to impress by placing it through covers to take two more runs. He follows it up with a wondrous cut shot. Another boundary to complete the over. He has touched dizzying heights here in terms of batsmanship.
Delhi 55/1, overs 6
K Pietersen 32(21), D Karthik 14(7)
Karthik facing slow left arm orthodox, Akshar Patel. He straightaway essay a boundary. Now it is Pietersen facing a SLA. Well he has had his problems of facing SLA. He smehow gets through the over though he didn’t look convincing at the crease.
Delhi 47/1, overs 5
K Pietersen 31(18), D Karthik 8(4)
Sandeep continues to bowl for Punjab. He needs to bowl a few good overs here for Punjab. Karthik though plays a sweep shot for six. Sandeep won’t like it as no pacer wants to get swept for six.
Delhi 37/1, Overs 4
K Pietersen 30(16), D Karthik 0(0)
Another fine boundary for KP through the off-side. When it hits the middle of KP’s bat he comes across as a special player. The top edge hook from KP’s willow too goes for a six. Who can forget him hooking Shoaib on the front foot for a six at Faisalabad for six on the front foot. Now that was bowled at 98mph.
Delhi 19/1, overs 3
K Pietersen 12(10), D Karthik 0(0)
Sandeep continues to find a bit of swing. Delhi need to start well here, as the deck is flat. Well what was Vijay trying there? It didn’t even seem like a flick shot. A shot without any conviction behind it and he gets out. One though has to give credit to Hendricks for taking a fine catch as he had to back peddle to take it. Pietersen though gives a glimpse of his power to thwack a boundary through covers.
OUT! M Vijay c B Hendricks b S Sharma 5(8)
Delhi 11/0, Overs 2
M Vijay 5(6), K Pietersen 6(6)
The second over of the game is bowled by Hendricks, the South African. Pietersen though stands tall to play a superlative shot on the on side. KP has to show his class today. Where is the KP who when he even played for England A in Duleep trophy back in 2003-04 played felicitous strokes??
Delhi 6/0, Overs 1
M Vijay 5(3), K Pietersen 1(3)
Sandeep Sharma opens the bowling for Punjab. He straightaway finds a bit of late swing to Murali Vijay and that helps. Most batsmen struggle against late swing. Pietersen too struggles a bit against late swing. Vijay though ends the over with a well timed boundary on the off-side

Hello and welcome to CricketCountry’s live blog of Match 45 of the Indian Premier League (IPL) between Delhi Daredevils (DD) and Kings XI Punjab (KXIP). I am Bharath Ramaraj and I will be bringing live updates of the match. Delhi are out of contention while Punjab are a win away to secure their last four spot.

Dwindling at the bottom of the table, Delhi are out of the playoffs race. The biggest disappointment for the Delhi side has been Kevin Pietersen. Against Rajasthan, Pietersen looked out of sorts and seemed to be taking his eyes off the ball.

For Punjab, Glenn Maxwell, David Miller and George Bailey, have been amongst the runs. Maxwell has already made over 500 runs in IPL 2014. The left-handed Miller, and Bailey have chipped in with runs when required. On the bowling front, Akshar Patel, Mitchell Johnson, Sandeep Sharma, Lakshmipathy Balaji and Rishi Dhawan have been among the wickets.  Sandeep has swung the ball late, and in any format of the game getting the new ball to swing late is an asset to the side. 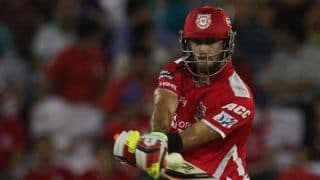 IPL 2014 predictions: Kings XI Punjab should pull off a win against Delhi Daredevils