Follow Live Blog of the IPL 2014 match between Punjab and Mumbai.

Here are the teams for today:

Changes to the side: David Miller has been given a break and Shaun Marsh gets a game finally. Harbhajan Singh is unwell and Praveen Kumar comes in.

Toss: Mumbai win the toss and have elected to field first.

Hello and welcome to CricketCountry’s coverage of the Indian Premier League (IPL) 2014 game between Kings XI Punjab and the Mumbai Indians. I am Nishad Pai Vaidya and will take you through the game. This match is being held at the Punjab Cricket Association Stadium, Mohali. Finally, Punjab move to their original home ground after playing two at Cuttack. And they come to their home ground after securing qualification through to the playoffs. They have been by far the most exciting team in the IPL 2014. Now, Mumbai Indians, a team that beat Punjab are up against them. Mumbai are facing an exit and a defeat would make it certain. Their qualification hopes hang by a thread and their chances are very bleak, unless there is a miracle and other results also fall in place.

You can read more about this game in our preview. Also, there are some key battles in store such as Glenn Maxwell vs Shreyas Gopal. And then what do the teams need to go through to the next round. So, there is plenty to look forward to ahead of this game, which is more important to Mumbai than Punjab. 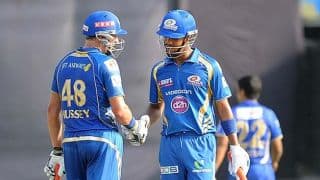